North Shelby took on the Eagles on Friday, February 14. With an exciting fourth quarter, the Raiders were able to get the victory 50-49.

The Raiders got off to quick start after Kyle Smith drained a 3-pointer. The game was tied after Knox County’s Connor Hayes hit a 3-pointer, 5-5.

“Proud of their effort. We executed, but kind of a flat start, but I didn’t think Knox County had a very good start either,” said NS head coach Landon Daniel.

Knox County took over the lead and ending the first quarter it led 21-16. The second quarter played out in favor of the Eagles as they gained a three-point lead 28-25.

The Raiders only trailed 35-32 after Smith scored a 3-pointer. Gus Williams and Smith scored buckets within 45 seconds apart giving NS a 36-35 lead. The Raiders tallied five more points in the quarter adding to their advantage 41-35.

Knox County’s head coach Zach Short said, “Well, credit is due to North Shelby because those kids came out and played hard and really did a good job of just being more active and more physical than us.”

Short added, “A lot of respect to North Shelby. They played a great game and they got the win. I’m looking forward to see what they can do in their district.”

North Shelby’s Silas Presson went two-for-two from the free throw line and tallied a bucket giving NS a 45-37 lead. Things got interesting after Hayes scored five points with under a minute left in the game giving Knox County a 49-48 lead.

The Raiders took control with 35 seconds on the clock after Elijah Greenwell hit a shot and with KC not able to hit any shots, the Raiders were victorious.

“There at the last play, we knew the two guys who we didn’t want to shoot the ball. We made sure they were covered and executed it well,” said Daniel. 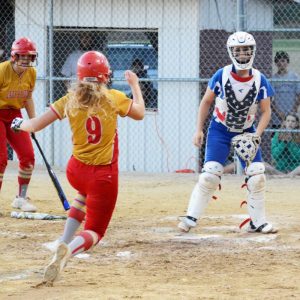