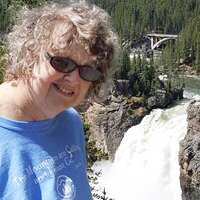 Dian was born on December 19, 1957, in Hannibal, the daughter of Frank “Bud” and Ann (Little) Kunce.  Dian belonged to the Church of Annunciation in Kearney, where she served on the Parish Council. She also attended St. Mary’s Catholic Church in Shelbina. Dian was a volunteer for the Shelby County Food Bank and a member of Recess Forever. She taught middle school for over 30 years.

After retirement, she worked at the Mid-Continent library in Smithville. She also continued to work at the school with at risk kids in Kearney.

She enjoyed traveling across the country and overseas. She especially liked visiting New York and going to the theater. Dian “Ta Ta” (what her nieces and nephews called her) loved to take them with her when she traveled. She belonged to a book club comprised of her close friends. Dian liked playing cards with the family and spending time with friends and family.

She was preceded in death by her father, grandparents and lots of aunts, uncles and cousins.

A Celebration of Life will be held in Kearney at a later date.

Memorials may be made to Susan G. Komen Breast Cancer Association, Neighbors Helping Neighbors and the Shelby County Food Bank.