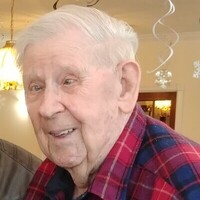 Glenn Gail Wallace, 98, of Clarence passed away July 7, 2020 at Shelbina Villa in Shelbina.

Glenn was born January 20, 1922 in Clarence to Rueben J. and Annie (Albright) Wallace. He was united in marriage to Doris Louise Davis on July 5, 1966. She preceded him in death in January 2005.

He is survived by three nieces and one nephew, Susan Parent, Bruce Wallace, Colleen Gonzales, and Sarah Seat; and many great nieces, nephews, and many cousins.

Glenn retired from the U.S. Postal Service in 1978.  He served as a letter carrier with routes out of the Anabel and Clarence post offices.  The Missouri Rural Letter Carrier Association awarded him the 60-year membership pin at his 98th birthday party earlier this year at Shelbina Villa. Glenn even continued to deliver mail after retirement. After the Villa received the mail from the local postal carrier, he would distribute it to his fellow residents at the Shelbina Villa.

Glenn strived to send birthday cards each year to members of his family.  He was a kind and generous spirit.  His dry sense of humor, steadfast presence and kindness will be greatly missed by family and the many friends that he called his family.

Funeral services will be held Saturday, July 18, 2020 at 10 a.m. at Greening-Eagan-Hayes Funeral Home in Clarence. A visitation will precede the service from 9 a.m – 10 a.m.  Burial will follow at Maplewood Cemetery in Clarence. Memorials can be made to Shelby County Historical Society and Macon County Flywheel Club.