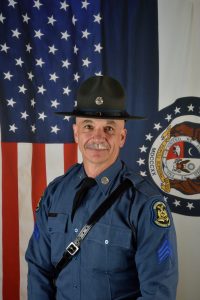 Sergeant Rohn is a native of Nazareth, Pennsylvania, and he graduated from Nazareth High School. He holds an associate degree in general studies from Central Texas College, Killeen Texas. Sergeant Rohn is married to Nichole (Salmons). He has two grown children.

Far too many people die in traffic crashes each year in Missouri. The choices you make when you’re behind the wheel matter. Make good choices, so you’ll never have to say, “If I could just go back …”