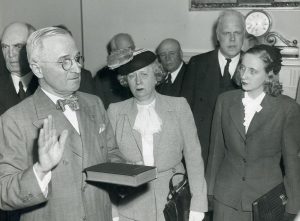 Vice President Harry S. Truman (left) was sworn in as the 33rd president of the United States on the evening of April 12, 1945 at the White House following the death earlier that day of President Franklin Roosevelt. Truman had been vice president for 82 days. Pictured with Truman at the solemn ceremony are his wife, Bess (center), and daughter Margaret (right). Photograph courtesy of the Harry S. Truman Library and Museum in Independence.

This week marks the 75th anniversary of America’s atomic bombings of the Japanese cities of Hiroshima and Nagasaki. Five days following the latter attack, on Aug. 14, 1945, the Empire of Japan agreed to surrender.

“President Truman proclaimed last night that August 15 and 16 be legal holidays … The Shelbyville post office and Courthouse will be closed today and tomorrow. All of the business houses are closed today and Mayor W.T. Dimmitt has made it optional whether they remain closed tomorrow.

“The Shelby County War Chest, in honor and respect to each Shelby County boy who gave his life for the welfare of the nation, is arranging to place a picture of same in the Courthouse lobby.”

In the first of a two-part report that will conclude next week, the story is told of what happened to two Shelbina men on the morning of Sunday, Dec. 7, 1941 when Japanese air squadrons commenced with an attack of the United States at Pearl Harbor, Hawaii.

Following that are profiles of two men, one living and one deceased, who also served America in the war.

Coonrod, in her 2004 report, included the following opinion:

“While this feature article focuses on five specific World War II veterans, Shelby County residents owe a deep sense of gratitude to all the men and women who sacrificed and served for the principle of democracy and freedom.”

Some of the answers to a reporter’s questions you will read below and beyond in this report were given with passion and emotion.

According to a Feb. 3, 1943 article in the Shelbina Democrat, Navy gunner Mayfield was in the shower when chaos commenced from the Hawaiian sky.

“The loud speaker system called every man to battle stations. He and others in the showers looked at each other in surprise,” the Democrat reported.

“In a moment, the loud speaker called anti-aircraft gunners to man their guns and ordered those not on duty to take cover. In another few moments, the first aerial torpedo blasted into the doomed ship.

“Ray says it seemed like the deck below him jumped skyward. Hardly a 100 yards away, the Arizona exploded.”

Sparks suffered a leg injury and the hair on his head was burned off. Sparks reportedly swam a mile to shore, along the way saving a colleague.

Two days after the attack, Mayfield wrote a letter to his parents. It is unknown how long it took for them to receive it.

“I never dreamed I’d have to go through such a hell. Bursting bombs and flying steel. I can’t tell you how mad it was or how much damage was done because I might give away a military secret,” he wrote, in part.

“I fought my way through oil, smoke and flame and swam ashore. They came down in waves and tried to machine gun us. I could see the Rising Sun so close I could have hit them with a rock,” Mayfield continued. “Some men with oil on them caught fire and made human torches.”

A postscript to Mayfield’s letter read, “Dad, it’s just like shooting quail. The old practice sure comes in handy.”

According to ussoklahoma.com, a website about the battleship, 429 Oklahoma crew members were killed.

Less than a year after Pearl Harbor, Sparks survived the sinking of a Benham destroyer ship. Mayfield served on the cruiser San Francisco.

Victor Sparks died in Madison in 1962. At the time of his death, Sparks was a rural mail carrier. After the war, Ray Mayfield took a job with Douglas Aircraft in Long Beach, California. Mayfield died in Los Angeles County in 1990. 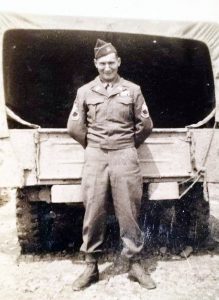 Pearl Harbor prompted Mr. McConnell to join the Army. Newly married, he had to liquidate a small farming operation near Leonard. Following training in Texas, McConnell was sent to the Pacific Theater.

“He saw a lot of combat. He was on Leyte and Luzon (Philippines),” his son, Jim McConnell, recalled. “There was a battle called the Battle of Purple Heart Canyon. That happened to be a situation where there’s a deep ravine and there are soldiers entrenched on each side of the ravine, so they weren’t very far apart just shooting back and forth. They were close enough, they could holler at each other.”

“They ended up losing a lot of their unit. In fact, my father was the highest-ranking person left in his unit,” Jim McConnell said. “They tried to give him a field commission then to be a commander. He turned it down, basically, because he didn’t want to have to decide who lived and died.

“If you said, ‘Who is going to be point?’, chances are they were going to be killed before the rest of the unit if they were in a skirmish while you’re moving around on one of these islands.”

At one point, Frog was trapped behind the lines and went without food or rations for 10 days. He later contracted malaria and was wounded in a knee.

“People got hurt so badly, he turned them down when they were trying to give him a Purple Heart,” Jim said. “They were in some bad situations.”

Following fighting in the Philippines, Frog was sent to Okinawa Island, Japan. One day, he was told to courier just-received orders to the commanding officer.

“The orders were about the invasion of Japan,” Jim said. “His unit was supposed to go in on the first day. The way I understood it, it was on the south end of the island which was more of a diversion. They wanted to get their attention there; then hit them from the side to take it.

“They would have gone by sea on landing crafts. They were estimating a 97-percent casualty rate for them hitting the beach,” he added.

President Truman had been advised an invasion of Japan would result in half a million American casualties: 250,000 killed and 250,000 injured.

On Aug. 6, 1945, word was received in Okinawa that the United States had hit Hiroshima with a “super” bomb. Truman had been Commander in Chief for all of 116 days.

Frog’s unit helped liberate some Japanese prisoner of war camps. What he witnessed was very disturbing.

“He got very upset at my older brother when he bought a Japanese car in the 70s,” Jim said. “I realize with us younger folks, times change. But, you never get that out of your craw.”

Howard traveled to Korea to await the arrival of a ship that would take him to San Francisco. Jim estimated the wait was two months.

“He told a story about some medical supplies they were supposed to be looking after, gathering supplies and what not. Well, there was a whole barrel of grain alcohol that was a medical supply,” Jim said with a laugh.

“Young men being young men, they, of course, commandeered the alcohol.

“They enjoyed themselves as best they could being stuck in Korea.”

Howard and his late wife Norma started a family. Frog became a truck driver after the war. Later, he ran a fertilizer plant in Clarence for about 25 years. 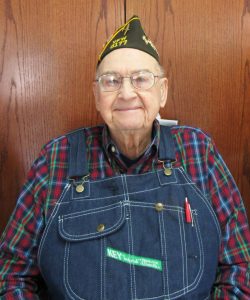 Bob Vickers of Clarence and Frog were good friends dating back to their youth. Mr. Vickers was from Hagers Grove with Mr. McConnell just up the road. Bob indicated he was an honorary pallbearer at Frog’s funeral.

“They were together at Clarence Care Center. The last three or four years of his life, they spent the better part of the day talking to one another,” Jim McConnell said.

When Pearl Harbor occurred, Vickers was a freshman at the University of Missouri. During the first semester of his sophomore year, he enlisted in the Army Air Corps.

Trained as a bombardier then navigator, on September 12, 1944, Bob and crewmates took off in a B-17 Flying Fortress from England on a bombing run. Their target was deep inside Germany.

“I flew 27 ½ missions. The half was us being shot down,” Vickers said. “We didn’t get to drop the bombs; they got us about 30 miles east of Berlin.”

Bob and most of the crew parachuted; several were badly injured. However, one man had previously indicated he would never jump. The gentleman did not and went down with the aircraft.

“An old farmer got me. He had an old long gun,” Vickers recalled. “I could have knocked him down and got away, but the Germans would have called in the dogs. I didn’t think I had a chance.”

Bob’s welcoming committee grew larger as he was forced to walk to a small town toting his parachute.

“He was beating me with that gun on the back of the head with the butt of it. I was glad he didn’t shoot me,” Vickers said. “Women all come a running out of the houses. They had limbs off of trees and rotten tomatoes, dishwater to throw on me.

“I didn’t dare show any resistance or else, he would have probably shot me.”

At the town jail, Bob was reunited with the B-17’s tail gunner. That evening, they were taken to a bigger town and the next night to Berlin.

“That was kind of a dungeon place. There were about 75 prisoners already there,” he said. “There were bugs and lice and everything else; they’d just eat you up. You never heard such cussing and carrying on.”

The prisoners were later trucked to a railway station. Under very cramped conditions, the men were taken southwest to just outside Frankfurt for interrogation.

“We were in solitary confinement. While we were there, our men bombed Frankfurt. It was pretty close,” Vickers said.

Bob talked about his four interrogators.

“They were smart. They were sharp. One of them had gone to college here in the United States and the others spoke perfect English,” he said. “They could tell me more about myself than what they got out of me.

“The only thing we would give them was name, rank and serial number. That was it.”

Afterward, Bob and other officers were taken 450 miles north to a prisoner of war camp near Barth. When he arrived, approximately 5,000 Allied officers were held there. Bob became prisoner No. 5,753.

“On a real clear day, you could see the Baltic Sea from there,” Vickers said of the place where he would remain until spring of 1945.

Vickers and his colleagues were liberated by Russian troops. By that time, 11,000 officers were imprisoned in the camp.

He indicated the Germans hated the Russians, and vice-versa.

“That night, the Germans left and the German guards in the towers gave their guns and stuff to the Americans,” Vickers said. “The Americans manned the towers. It was a night or two before the other American Army men got there. It all happened that fast.”

Bob made his way to France; then returned home by ship for R&R (rest and relaxation). He was stateside when the war ended.

Vickers noted that on four of his flying missions, the B-17 dropped leaflets in a casing. At a certain altitude, an explosion would scatter the paper as it continued descent. He said the leaflets were printed in German on one side; Czechoslovakian on the other. The objective was to inform people on the ground that German leader Adolf Hitler was not telling the truth about the war.

Bob married the late Helen (Peterman) Vickers, bought a farm south of Clarence, started a family and made agriculture his living for decades.