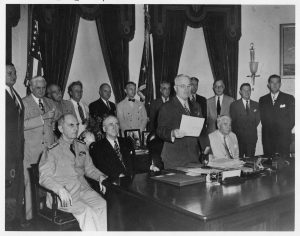 At 7 p.m. Washington D.C. time on August 14, 1945, President Truman announced from the Oval Office that the Empire of Japan had agreed to surrender, essentially ending World War II. Seated immediately to Mr. Truman’s left is Vice President Alben Barkley. To his immediate right is Secretary of State James Byrnes. Photograph courtesy of the National Archives.

The Empire of Japan did not immediately surrender following the United States’ bombing of Hiroshima on Aug. 6, 1945. The Aug. 9 attack on Nagasaki was more persuasive, but another development was at play.

Author Ian W. Toll emphasizes in his upcoming book Twilight Of The Gods: War in the Western Pacific, 1944-45 that the day before (U.S. time) Nagasaki was hit, the Soviet Union declared war on Japan and invaded Manchuria.

“I think it was that Soviet attack that was really the final straw that convinced the ruling group in Japan that they had no other choice (but to surrender),” Toll said.

“I think invading would have been a disaster regardless of what kind of casualties we would have taken. Avoiding a bloody invasion of Japan was absolutely essential. That’s why I think using the atomic bomb was inevitable,” Toll said. “Using the bomb, I think, was defensible. Using it against a city is a different question. I think we should have avoided that, that’s just my belief. I would have liked to have seen the weapon used against a military target.”

What follows are profiles of two Shelby County World War II veterans, one deceased and one alive. 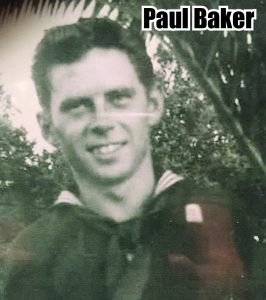 Mr. Baker grew up in the Kendall area. He joined the U.S. Navy a year following high school at 19. Paul received a farm deferment, but enlisted after a few months. He arrived at Farragut Naval Training Station in Idaho in May 1944.

An Aug. 3, 2020 report in The Spokesman-Review newspaper of Spokane, Washington cited Farragut as the second-largest naval training base in the world (behind Naval Station Great Lakes-Chicago) and the largest “city” in Idaho at that time.

Baker left Farragut headed to Norman Naval Air Station in Oklahoma for ordnance and radar training. After time in San Diego, Paul was part of a Carrier Aircraft Service Unit in Wildwood, New Jersey.  His son, Don Baker of Columbia, picks up the story from there.

“Dad was a plane captain, I think that meant he moved the planes around and serviced them,” Don said in an email. “He got into it with an officer and told him off; telling him if he didn’t like it, he could just transfer him which he did to the South Pacific through San Diego.”

While back in California, Paul made an unauthorized visit to Betty Jean Butler, whom he later married in 1947.

“He was AWOL for a couple of days, but they didn’t throw him in the brig since he was shipping out anyway,” Don said.

While en route to Kwajalein Island in the Marshall chain, Paul had a stopover in Hawaii.

“He talked about seeing the USS Arizona when he went through Pearl Harbor on his way to the South Pacific and how moving that was to him with the super structure still sticking out of the water,” Don said.

Upon arrival at Kwajalein, he was assigned as a tail gunner on a torpedo plane. Don Baker believes this occurred while on the aircraft carrier USS Boxer but has been unable to confirm the ship’s name for certain.

“It was not a very desirable job, but he was a small 19-year-old so he could fit in the tail of the plane,” Don said. “He told me he was aboard ship awaiting the invasion of Japan when the Captain made an announcement that the United States had dropped a powerful bomb on Japan and that the war was over.”

Seaman First Class Paul Baker was discharged on May 23, 1946.

Don indicated Paul admired his Commander in Chief in World War II for the rest of his life.

“He loved Harry Truman. No one could ever say anything bad about Harry when my dad was around,” Don said. “He was convinced, and I believed him, that Truman saved his life. My dad never forgave the Japanese for the cruelty to POW’s during the war, no real animosity toward the Germans (even though they surely committed horrendous acts of cruelty to the Jews) but lots toward the Japanese because of Bataan and other atrocities toward POW’s.”

Back home, Paul and Betty started a family in the Kendall area. He became an electrician and farmed. In 1985, Paul and Don founded P&D Electric, Inc. in Hannibal. 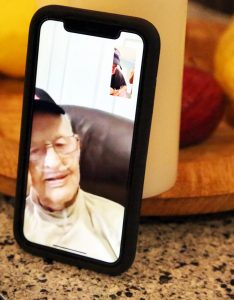 Mr. Greening, a resident of Shelbina, used to joke he was invited to attend three different class reunions.

First, his mother had Pete repeat third grade because he didn’t know his multiplication tables. Second … during the war, Greening was drafted into the Army after his junior (emphasis added) year of high school in Monroe City.

Third, he graduated after the war was over.

Pete underwent basic training in Alabama; then it was off to Italy.

“They tell you to do this and to do that,” he said in a FaceTime interview from the Shelbina Villa. “I’d usually do it.”

Greening indicated his main responsibility was guarding mail trains. The trips were not pleasure rides.

“We would be gone for a week at a time; the southern and northern parts (to France). Up in the mountains,” he said. “Sitting here now, I wouldn’t mind sometime to get on an airplane, go over to Italy and tour some of the big cities over there.”

Pete inferred he would take a pass on trains this time and travel to and from the cities by air.

He also offered this observation about Italy: “I’ll tell you what, a lot of pretty girls over there.”

Pete indicated one of his colleagues was a pitcher for the Philadelphia Phillies and they lived together. When not riding the Italian rails, they played baseball. Son-in-law Ralph Eagan recalled Greening saying he played first base.

Money may or may not have been on the line during ball games but just in case it was, the guy from the Phillies was on the mound.

When armed hostilities in the European theater ended, Pete remained stationed in Italy. Word was received from the other side of the world that Japan had surrendered. He was asked if there was a celebration.

Greening’s daughter Glenna Eagan asked her father what he thought of Harry Truman.

“Well, of course, I liked him,” Pete answered. “I wasn’t connected or close to him, but I knew of him.”

Following the interview with Pete, Ralph Eagan expanded on some memories.

“He always said they were getting him ready to invade Japan,” Eagan said. “Basically, he said that Truman was his favorite President. He said, ‘I knew I was going to get killed if I had to invade Japan.’

“He never really talked about it too much, the war.”

Pete gained an interest in the mortuary business while in high school working at Wilson Funeral Home in Monroe City.

Following the war, he gained his embalmers license by traveling by train every weekend to and from a school in Chicago. The coursework took a year to complete.

According to Eagan, in 1952, Pete and a brother, Virgil, opened a funeral home in Clarence. A few years later, they expanded.

“In 1958, I think it was, Pete and Sue moved to Shelbyville and they operated the two together as a partnership. Virg and Evelyn lived in Clarence,” he said.

“The traditional way in which Americans have understood the atomic bombings sets up this forced binary … You have to choose either hit these cities without warning or launch an invasion. I personally don’t think that is right. I think that there were many other options other than just those two,” Toll said last week.

He mentioned an Allied naval blockade of Japan as one possibility.

“I think you can make a pretty good case although, of course, as a counter factual, that an invasion would not have been necessary with or without the atomic bombs,” Toll continued. “Keep in mind, the invasion of Kyushu, the first stage of the planned invasion, the target date for that was Nov. 1. That’s almost three months after the bombing of Hiroshima. So, the idea the bombs were a last resort to an invasion that was just about to happen, that is not quite right.”

Toll indicated he is aware some veterans and their family members will disagree with his assessment.

“Veterans of that war had their own very, very strongly-held beliefs about what had happened at the end of the war,” Toll said. “As someone who has interviewed, literally, hundreds of World War II veterans, I have never made it a practice to argue with World War II veterans about this. I present my views. But I think it is important to recognize and to honor the very strong feelings veterans have about this subject.

“There are so many people in this country who have fathers, grandfathers, great-grandfathers, uncles who were veterans of that war and who really believed that their lives were on the line,” Toll added. “That’s something I respect very deeply.”

The Herald would like to acknowledge the assistance of Kathleen Wilham and the Shelby County Historical Society and Museum for assistance with this report.