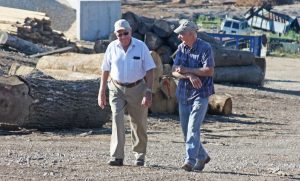 Leroy Cardwell (left) and longtime employee Eddie Weaver (right) converse while walking on the west side of the Cardwell Lumber facility on Friday, Aug. 21. Photograph by Troy Treasure

NOVELTY – On the west side of Highway 15 near here is a commonly observed site.

If a driver even gives the place a first thought, it might be “OK, the sawmill.”

As a point of fact, the approximately 40-acre Cardwell Lumber facility consists of a group of mills.

On the morning of Friday, Aug. 21, Cardwell Lumber was a flurry of activity. Leroy, theoretically, is retired. Chatting with employees and explaining different machines and product components to a reporter, you would have never known it.

Cardwell appeared far from being out of touch with the company he co-founded in 1964.

The present and future leadership of Cardwell Lumber now belongs to Leroy’s grandsons, Bill and Junior. Bill, 31, is company president.

Approximately 70 people work here with another 35 at a company-owned outlet in New London, along with about 12 at a branch in Jefferson City.

Leroy Cardwell cited the loyalty of employees as directly proportional to the success of the company.

“These farm boys, they know how to work. They give a day’s work for a day’s pay,” he said. “They are very proud of the business and their job. They work as if it were their own.”

One of those is Eddie Weaver, who has been with the company 46 years. He manages a mill that cuts grade lumber and operates a head saw.

“I like it here. Leroy’s always been good to me, so I stayed here,” Weaver said. “Most of us work pretty well together.”

Just some of the additional Cardwell employees with lengthy longevity include Richard Edwards with 30 years, 27 running the company’s stave mill. His sister, Janie, has 25 years invested in the operation.

An early-morning fire on Sunday, Feb. 16 gutted the stave mill, but the setback proved temporary. According to manager Chris Goodwin, both lines in the mill were back on line in mid-June.

Leroy Cardwell estimated, in dollar value, 60 percent of the company’s business is cooperage, manufacturing the staves and ends; components that go into creating barrels to make whiskey and other spirits as well as wine.

“Of the 60 percent, I would say at least 40 percent goes export,” he said. “But the majority of it, one of our biggest customers is Jack Daniels. We go there two times a week into Blue Grass Cooperage (Louisville, Kentucky) which makes the barrels for Jack Daniels.” 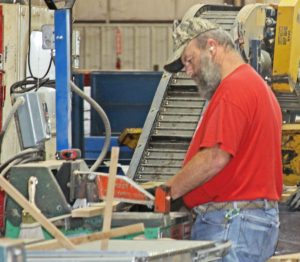 The remaining 40 percent of Cardwell’s production is lumber, some cut for production of pallets, flooring and trim.

Bill Cardwell indicated, overall, 10-to-20 percent of what the company produces is exported. Australia, Scotland and Japan are its biggest foreign customers.

Bill understands the responsibility inherent with keeping the company viable.

“It’s not just the Cardwell family business. It is a community family business, we have several families in here,” he said. “Most of these people have been around here since I could walk. I like to see all these people in the community around. I know every one of them. I don’t want to let any of them down.”

Junior Cardwell followed up Bill by suggesting a willingness to embrace change, if necessary, is important.

“You try to roll with it the best you can. Technology anymore is coming so far,” he said. “That’s more of the side I see in maintenance, the technology and advances in equipment.”

On this day, many Cardwell employees were wearing red hats and shirts. Tabatha Shanley explained.

“It’s red-shirt Friday in support of the troops. Red. Remember Everyone Deployed,” she said.

Considering what Cardwell Lumber does, and practically all of it unseen, a passer-by on Highway 15 might think the idiom “You can’t see the forest for the trees” is apropos.

Not so. Leroy’s vision and dedicated employees have ensured that not happen for decades.