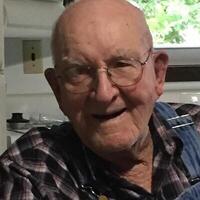 James Franklin Van Houten,  102, of Clarence passed away Tuesday, September 1, 2020 at his home in Clarence.

He was preceded in death by his parents; wife and one sister, Ruth Simpson.

James was a member of the Union Church, Gideon’s, and the Flywheel of Macon.  In 1964, he started his career as a land contractor.  He also farmed for several years, and up until this past year was still driving a tractor.  James enjoyed restoring antique tractors, working in the field, playing cards and pool, crossword puzzles and reading his Bible.