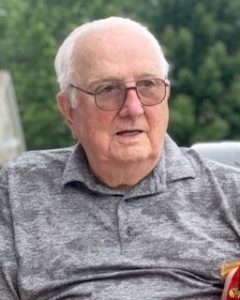 Robert L. McCollum, 91, of Clarence passed away on Sunday, September 13, 2020 in the comfort of his home, surrounded by loved ones.

He was born in St. Catherine, Missouri on October 25, 1928, the youngest of 10 children to Elmer Franklin and Rosa Belle (Gardner) McCollum. He grew up in Linn County, graduating from Brookfield High School in 1947.

Bob worked for Walsworth Bros. of Marceline as a salesman for three years and married Norma F. Benton at the Clarence United Methodist Church in Clarence, MO on July 23, 1950.  After serving two years in the U.S. Army during the Korean War, he returned to Clarence and became the owner and operator of the Jewel Theatre, until it closed in 1961.

He managed the Country Inn Truck Stop/White Mule Oil Company for 20 years and was also a Shelter Insurance Agent in Clarence for 37 years, retiring in 1991. Bob and Norma started their own fundraising business in the early 80’s, named MAC Enterprises. This business started with pizza making, in assembly line fashion. among numerous other quality products, which later ended with distributing Aunt Bonnie’s Frozen Cookie Dough in a tub. Many years later, Bob could still be known to reach into his suit jacket pocket an hand you a “Smencil”  (scented pencil) in it’s cute tubular packaging.

Through their business, their travels took them across a four state span, in which they were able to help so many youth groups, church groups, schools, clubs and organizations to earn the necessary funding to obtain their many goals, while having fun doing it!

Bob was a member of the United Methodist Church, where he served on the Church Board for a number of years, as well as the Clarence City Board, Clarence Civic Club and County Economical Development. He served 13 years on the Shelby Co. RIV School Board and has been the financial officer of the American Legion for nearly 60 years.

He was preceded in death by his loving wife, Norma in 2013, his son, Russell Mark McCollum in 2018 and all his siblings and their spouses.

Bob never met a stranger and enjoyed visiting with people, telling stories and his silly jokes. He was a soft-spoken, humble man who never wanted the attention focused on himself, but the things he enjoyed the most was spending time with his family and eating good food, especially his “sweets”, he did have a huge sweet tooth! He was an avid golfer and enjoyed playing with his “old geezer friends” (HIS words, not ours) at the Shelbina Golf Course every chance he got, with weather permitting.

The funeral will be held at 11 am on Thursday, October 1, 2020 at the Clarence United Methodist Church.  A visitation will precede the service starting at 9:30 am at the church. Burial will be held at the Missouri Veterans Cemetery in Jacksonville, MO at 2 pm. In lieu of flowers, the family requests that memorials be made to Neighbors Helping Neighbors, Helping Hand of Clarence or Clarence United Methodist Church.