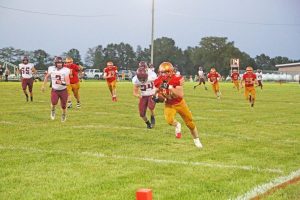 North Shelby’s Luke Schwanke returns his punt block for a touchdown during the first quarter of Friday’s 80-8 victory against Schuyler County. (Click photo to enlarge) Photograph by Marlana Smith

“It’s always good to play the bluebloods. Last year, beating North Andrew really kind of put us on the map with the bluebloods and showed we could play with them,” Raiders head coach Seth Bass said.

“I’m sure they will be looking for revenge,” Bass continued. “We’re going to have to see how we handle the hostile environment, long travel and a good, very physical football team.”

“It’s up front and it all begins with No. 54 (Jackson Lunsford),” Williams said. “He gave us problems the entire game last year. He’s a dominating player.”

Williams indicated coaching against Bass is a challenge.

“He does such a great job of setting up the formations he wants and forcing you to adjust,” Williams said.

“He was our fullback last year and was injured when we played there. He gave it a go in the first quarter, but had to come out,” Williams said. “He’s a fantastic downhill runner and he’s tough.”

Bass stated the two teams are cut from the same cloth.

“They don’t have the team speed they did last year but they are still really good,” Bass said. “They run option, just like us. There’s no fooling you, they’re going to try to out-execute you and out-physical you.”

Lunsford cited the advantage of having played the Cardinals previously.

“Oh, it is huge. It gives us an idea of what they’re coming with, what they’ve got,” Lunsford said. “Yeah, they’ve lost a little bit of speed, but they’ve got power behind it now. It will definitely be an interesting game.”

Against Schuyler County, the Raiders overwhelmed the Rams (1-3) on both sides of the ball.

“Before I knew it, I was at the kicker,” Schwanke said. “I jumped as high as I could, caught the ball right on my bicep, picked it up off the ground and ran it in.”

In addition to the punt block, Schwanke had eight tackles, four tackles for loss and two sacks.

Schuyler County is in its first year of eight-man play after departing the Lewis and Clark Conference in football. The Raiders and Rams played annually as members of the now defunct Tri-Rivers Conference.

“I had a lot of alumni and various people throughout the week talk to me about the game and how much it meant to them; to play an old, familiar foe,” Bass said. “They really wanted us to get after them, so I’m hoping they walked away happy.

After the game, Bass was asked about Knox County’s announcement last week it intends to begin eight-man play in 2021.

“I kind of figured it was coming. I really think from talking to a couple of people tonight that it’s going to push a couple of other dominos locally, too,” Bass said.

“If it does, hopefully we can start talking about a conference again,” he added. “Any road trip that’s under two hours is a great thing for us.”