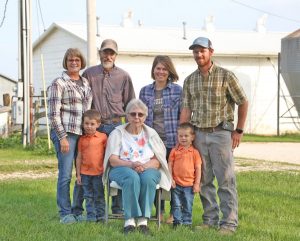 Larry Utterback once did the arithmetic.

He has milked dairy cattle 3.6 million times. A gentleman’s comment piqued Utterback’s curiosity about the count.

“I told him my shoulders were hurting and I was going to have to do something,” Larry recalled. “He said, ‘Well, you’ve probably put them (milking devices) on a million times.’ So, I just figured it up.

“That’s just putting them on, that’s not taking them off,” he added.

During 65 years, many memories were made.

The late Adolphus “Al” Utterback was born in 1925. He was raised near Rensselaer.

While working for John Deere in Moline, Ill., Al met Nora McMurl when both attended a mutual friend’s wedding. They married in Oct. 1950 in Watertown, Ill.

One family member described Nora as a city girl. When asked by a reporter whether she related to the character actress Eva Gabor portrayed in the television series Green Acres, she said yes.

“He didn’t like being cooped up, so we worked for five years to save money to buy a farm in Missouri on the other side (east) of North Fork,” Mrs. Utterback said last week. “In 1973 or 74, we moved here.”

Al and Nora started out with 18 cows. She and son, Larry, estimated the family had approximately 50 head when the move was made to their current location.

“He worked very hard,” Nora said of Al. “He was up about 3:30 or 4 o’clock in the morning, worked late at night but he never did any field work after dark. He made it his mission that he milked cows.”

Due to dairy farming’s nature, Al and Nora had no time to “vacation” for 20 years until the mid-1970s.

“We didn’t until Larry was old enough to stay and do all the work by himself,” Nora said. “We went to the state fair in Illinois and stayed all night.”

“We really splurged, yeah, we did,” his mother answered. “We stayed all night.”

Prior to that, the family did manage some day trips to the Missouri State Fair but those were long days.

“We’d get up early, early and milk and then go to the fair, spend the day there and drive home,” Nora said. “Whenever we got home, we milked.

“The cows were ready,” she added with a chuckle.

Larry was asked if his father was a perpetually optimistic person.

When questioned about the need for endurance, Larry indicated they really didn’t think about it.

“The work has to be done so you do it,” he answered.

“That’s what you took on and there are lots of rewards to it once you see what you’ve accomplished.”

Larry and wife Jayna have two sons, Brian and Scott.

“Grandpa was probably the hardest working person I know, other than my dad,” Scott said. “They were one and the same, I guess you’d say.”

Scott recalled talks while riding in the pickup truck with Al.

“Grandpa, I don’t know if he followed sports hardly at all, it was just the next gate or the cows,” he said. “We had to go through all the gates and I’d get out and get one, then he’d say, ‘I’ll get the next one.’ I thought he was just being nice but I think he was just in a hurry and didn’t want to watch me do it.

“Now that I have kids, I realize that.”

Scott also remembers sitting on Al’s lap steering the truck or a tractor while his grandfather worked the pedals.

“Grandpa taught us a lot of things.” 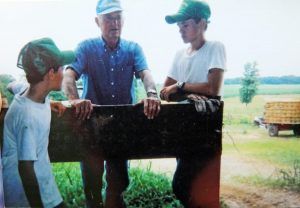 Al Utterback (center) is pictured with his grandsons Brian (left) and Scott. Photograph courtesy of family

“He just showed up here one day and asked dad if he could bring the elementary kids out and tour the dairy,” Larry said.

“Mr. Shores would come every year about February and dad and him would look at cows,” Larry added. “They’d stand around and talk for probably an hour or more because Mr. Shores liked looking around and seeing stuff.”

Over the years, thousands of school children visited the Utterbacks.

Jayna said in recent years, youngsters from Shelbina, Clarence and Paris came by; sometimes, all in the same day at different times.

It was a carnival-like atmosphere.

“The word got out,” Nora said with a laugh.

“Mom would buy them ice cream,” Larry added. “The Co-op would send out pencils, erasers and coloring books.”

Some of the children had a favorite activity.

“They loved feeding the baby calves and playing with them,” Larry said. “They thought the world of that. The grades a lot of times would color pictures at school and send them back.”

Jayna indicated the last field trip to the farm occurred May 3, 2019 when the family hosted 77 students from Paris and South Shelby Elementary.

“You would be surprised how many people you run into and they don’t remember me, really, but once they find out who I am say, ‘You’re the dairy farmer. I was there in Kindergarten or first grade,’” Larry said.

When asked if he was feeling a sense of sadness, melancholy or, conversely, looking to the future, Larry said yes to all of the above.

He mentioned missing, if not all then portions of, his children’s activities. With five grandchildren, he and Jayna look forward to watching them grow up.

Larry said Al told him and both Brian and Scott the following: