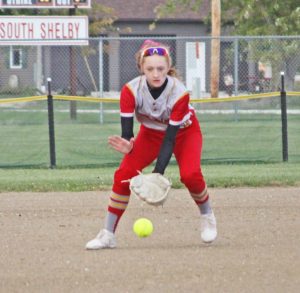 Natalie Thrasher finished 3 of 4, including a sixth-inning RBI double. Marissa McEwen, Hannah Wahl and Williams each had two hits for 10-2 North Shelby.

The Lady Raiders finished with 14 hits; all nine starters with at least one.

Three of the Lady Birds’ hits were doubles from Summer Hunolt, Kamryn Mitchell and Zoe Elliott; Mitchell’s and Elliott’s of lead-off vintage. Unfortunately for South Shelby, it could not translate those extra-base hits into runs. Three other SS inning-opening batters singled.

Lead-off batter Miranda Patterson ripped a single to right field. She was thrown out on a steal attempt of second by McEwen. Hunolt and Elliott added single base hits, but stranded on the paths.

In the top of the second, Meg Shively opened with a single to left off Elliott. Wahl’s bunt single advanced her to second. Shively scored on a South Shelby error. Elliott got out of a jam with a strikeout, pop out and foul-out. The Lady Raiders stranded two.

Leading 1-0 entering the third, Thrasher and Caroline Linberger notched consecutive singles to center field. Williams followed with her two-run rip to right. She scored on a Lady Birds’ throwing error.

NS added single tallies in the sixth and seventh innings.

North Shelby’s scheduled action in the La Plata Tournament Oct. 3 was rained out. Tentative plans are for the tournament to be played Saturday.