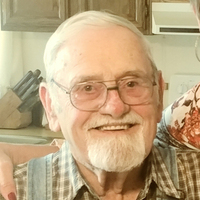 Merlin E. Earlywine, 86 of Lewistown, passed away Wednesday October 14, at Blessing Hospital in Quincy, Ill. The son of Stoker and Vivian Lamb Earlywine was born on December 23, 1933 at Logan, Iowa.

He was united in marriage to Norma B. Hunt on September 19, 1954 at St. John’s Lutheran Church in Hannibal, Missouri.  She preceded him in death on September 12, 2015.

Merlin was a member of St. Peter’s Evangelical Lutheran Church at LaGrange.  He served in the U.S. Army during the Korean War and received the Purple Heart.  He was also a member of Lewis County Memorial Post #578 and the Marriage Encounter Circle.  He was a lifetime farmer in Lewis County and a part time auctioneer. He love his family, never knew a stranger and was an avid bluegrass fan.

Funeral services will be held Monday, October 19, 2020 at 10:30 a.m. at St. Peter’s Lutheran Church in LaGrange with Rev. Jacob Hercamp officiating. Burial with graveside military honors will be in Grand View Burial Park in Hannibal.

Visitation will be held Sunday afternoon from 3 until 7 p.m. at Arnold’s Funeral Home in Lewistown.

Memorials may be made to The Great River Honor Flight or St. Peter’s Lutheran Church.