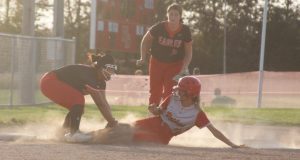 Thrasher hit 2 of 3 with three RBI.

“Against Atlanta, we were watching a lot or popping them up or hitting little-bitty grounders,” North Shelby head coach Haley Hardy said after the Knox County contest.

Thrasher had seven strikeouts with no walks against Atlanta while yielding nine hits.

Whitney Snow had the circle versus Scotland. The freshman hurler scattered six hits with 13 strikeouts and eight walks.

Hardy indicated she was informed earlier Thursday the Lady Raiders were slated to play a previously unscheduled game at Fayette Oct. 13. It would be the team’s last regular-season tune-up prior to first-round Class 1 District 9 play at Knox County Oct. 15 … another tilt with Scotland County at 7 p.m.

NS previously defeated the Lady Tigers 5-2 Sept. 19 in the championship game of the North Shelby Tournament.

Against Knox, Thrasher pitched a six-hitter with three Ks and three walks and error-free defense behind her.

The Lady Raiders added solo runs in the fourth and fifth innings. Snow’s RBI single to right field was a key hit in the fourth.

Knox scored twice in the top of the seventh on Riley Strange’s two-run double to center. Jennifer Hinkle was 3 of 4, all singles, for the Lady Eagles.