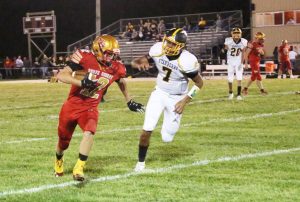 Carson Orr (12) runs past Stanberry’s Austin Schwebach (7) for a 15-yard touchdown during the Raiders’ game against the Bulldogs on Friday, Oct. 9 at North Shelby. Stanberry won 36-34 in overtime. Photograph by Marlana Smith.

North Shelby’s two returning all-state players from a season ago said Friday’s Top-10 tilt between the Raiders and Stanberry was the most aggressive contest they have been involved in.

Clutch plays by both teams resulted in huge momentum shifts.

Trailing 28-20 with 4:02 remaining in the fourth quarter, NS drove 64 yards on 10 plays. With 35 seconds left, the Raiders faced fourth and goal at the Bulldogs 1. Play No. 11 of the drive resulted in Carson Orr’s second TD of the game. Noah Greenwell punched in the vital two-point conversion.

NS forced five takeaways from a team with one turnover entering the contest.

“That’s pretty dang good. Hat’s off to our defense. They were out there a lot,” North Shelby head coach Seth Bass said, “but our kids, man, their heart and their effort. What a showing for them.

“It sucks they had to walk away with the loss.”

In the extra session, Stoneburner’s two-yard TD gave NS its first lead of the game, 34-28.

The Raiders failed going for two.

Stanberry (5-1) did not, making for a happy three-hour drive home to northwest Missouri.

“That’s the most physical game I’ve ever played. It’s No. 1, for sure,” Stoneburner said. “They’re good upfront, we’re good upfront. They hit hard and we hit hard.” 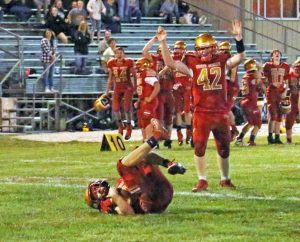 Cale Stoneburner rolls into the end zone during overtime giving North Shelby its first lead against Stanberry Oct. 9. Teammate Kyle Smith (42) shows his excitement along with the rest of the Raiders. Photograph by Marlana Smith.

“I’d put it right there, too,” Lunsford said. “If we just take one or two errors away, it would have been a different game. Hat’s off to them, they battled hard. We fought back, though.”

“We were only down eight,” Smith said, “but we knew we had to get the momentum on our side. That kickoff definitely started it.”

At Stanberry’s 37, NS needed just five plays before Greenwell scored on a five-yard run and the Raiders added two more tying the game 20-20.

Both defenses then had big stops.

Stanberry ate nearly five minutes of fourth-quarter clock with an 11-play drive that paid off.

On fourth and 19 at the NS 30, Schwebach snared a low snap and threw toward the end zone. Collin Sager made a sensational TD catch while covered by two Raiders defenders. A successful two-point try gave the Bulldogs an eight-point lead ahead of North Shelby’s late-game march.

In the first half, Stanberry went up 6-0 midway through the first quarter on Schwebach’s 21-yard scoring pass to Sager. A Stoneburner 23-yard run tied the score.

Stanberry added its third TD of the half on a one-yard keeper by Austin Schwebach followed by a successful two-point conversion.

“We didn’t finish drives quite as well as I would have liked, which was disappointing,” Bass said. “We made some mistakes, especially in the first half, that cost us some opportunities.”

NOTES: North Shelby rushed for 247 yards led by Stoneburner’s 127 … The Raiders dropped to sixth in this week’s eight-man media poll released Monday morning. North Andrew remained No. 1 followed by Southwest Livingston. The Cardinals received six of eight first-place votes. Drexel is third followed by Stanberry and SHNH (South Holt with Nodaway-Holt). East Atchison is No. 7, Archie eighth. Mound City is No. 9. St. Paul Lutheran and Worth County tied for 10th.