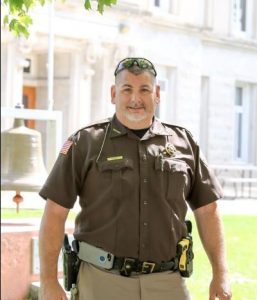 David Hoffman had known for some time his current term as Sheriff would be the final one. Looking ahead, he and Heather put together a retirement plan.

“This year, our family was able to start Grit and Grace Family Farm,” Hoffman said. “We have lots of animals to keep us busy and we have Christmas trees planted for future harvest.

“Unfortunately, I contracted COVID in mid-August,” he continued. “I continue to battle the aftereffects of it such as pulmonary embolisms, blood clots in my legs and poor lung function.”

David struggled to answer one particular question: What is your proudest professional accomplishment during a 28-year-plus career?

“He didn’t go into law enforcement for recognition, he did it to serve others,” Heather said on David’s behalf.

David then cited, “The many situations involving juveniles.” He indicated seeing positive outcomes as highlights.

The son of Jim and Sarah Hoffman, David grew up in Clarence and Tulip. The family returned to Clarence his sophomore year of high school. He graduated from South Shelby in 1986 and joined the U.S. Army.

Law enforcement actually had been an interest of Hoffman’s prior to entering the service. David originally hoped to become a military policeman; however, he was too young for that MOS (military occupational specialties).

As a result, Hoffman enlisted as a tanker, became a loader/driver in an M1A1 Abrams tank and was also the unit armorer. David served on the front lines of Operation Desert Storm.

After leaving the Army in 1991, Hoffman joined the Shelbina Police Department. Shortly thereafter, he became a Monroe County Deputy. In 1994, David was appointed Chief Deputy.

He was elected Monroe County Sheriff in Nov. 2008.

“The past 28 years are full of memories and stories that will be told for many years to come,” Heather Hoffman said. “There are several times that David found himself in unusual situations and a few that ended up humorous.”

One such instance was “apprehending” an alligator.

“Thank goodness for all the hours of watching gator hunting on TV,” Heather said.

Like many of his colleagues, David has definitive thoughts on the current, and future, status of policing.

“With the trends we are seeing across the nation, there is a concern that there will not be enough officers to fill open positions,” he said.

“I am thankful to live in communities that support law enforcement, not everyone is as fortunate,” Hoffman continued. “If things continue as they are, there will be a day you dial 911 and there won’t be an officer to respond.”

David concluded with the following:

“My future plans are to continue to recover, enjoy Grit and Grace, watch our daughters live out their dreams and be thankful for each day I am given.”