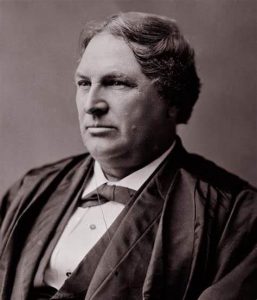 The late U.S. Supreme Court Justice Samuel Freeman Miller of Keokuk, Iowa is shown in this undated photograph. Courtesy of the Library of Congress Prints and Photographs Division.

The United States celebrated its Centennial in 1876. On Nov. 7, the nation held a presidential election.

The outcome went undecided for four months, resulted in a constitutional crisis and remains, arguably, the most controversial in U.S. history.

A judge from Keokuk, Iowa held a significant position in the heated debate.

Samuel Freeman Miller was appointed as an Associate Justice to the U.S. Supreme Court by President Lincoln in 1862.

In his 2004 book “Centennial Crisis: The Disputed Election of 1876,” the late Supreme Court Justice William H. Rehnquist wrote, “The Senate confirmed him in half an hour without reference to a committee.”

The presidential nominees in 1876 were Governors Rutherford B. Hayes (R-Ohio) and Samuel Tilden (D-New York).

In the election’s immediate aftermath, Tilden had more votes in the Electoral College. He also won the popular vote, yet Tilden never became president.

Tilden’s problem was he received 184 electoral votes, one shy of the 185 then needed to win. Hayes picked up 165.

Shenanigans by both political parties ensued.

According to a recent Salon Magazine report, Republicans used their influence in Florida, Louisiana and South Carolina to “toss out Democratic votes whenever they could.” In South Carolina, “eligible voter turnout reached an impossible 101 percent,” Salon reported.

Meanwhile in the Pacific Northwest, Hayes had won Oregon. However, Governor La Fayette Grover, a Democrat, tried to replace a Republican elector “with a pro-Tilden Democrat.”

To repeat: Tilden needed just one additional vote in the Electoral College to win the presidency.

Fast-forward to late January 1877. Congress established what was alleged to be a bipartisan 15-member Electoral Commission comprised of five senators, five members of the House of Representatives and five Supreme Court Justices.

Samuel Miller of Keokuk was one of the Justices.

“In actuality, three of the justices were Republicans (including Miller), so the Commission’s findings were a foregone conclusion,” Whitney wrote.

Whitney noted Hayes left Columbus, Ohio for Washington D.C. on March 1 not knowing for sure he would be inaugurated. Hayes quipped he might be back as governor within a week.

Nevertheless, Hayes was sworn-in as the 19th president of the United States on March 5.

Justice Miller died in 1890 still serving on the Court.

Chief Justice Rehnquist further wrote in his book, “Miller’s biographer, Charles Freeman, observes that when Justice Miller died it was generally remarked that the Court had lost the ablest of its members and the greatest figure in constitutional law since (John) Marshall.”

Miller is buried at Oakland Cemetery in Keokuk.

In addition to Miller, another member of the Electoral Commission was U.S. Representative James Garfield (R-Ohio). Garfield succeeded the one-term Hayes as president, but Garfield’s presidency was short-lived when he became victim of assassination.