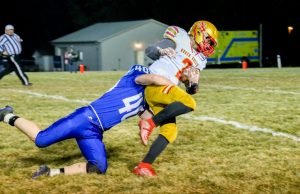 The good news is North Shelby is still scheduled for another football game this late in the season.

The Raiders (8-2) have not played since Oct. 23. In addition, NS has not been tested since a 36-34 overtime loss to Stanberry more than a month ago.

Head coach Seth Bass believes motivation will be no problem.

There is a pretty good reason for that.

Graduated quarterback Mack Anderson ran for seven touchdowns and threw for another in a 56-38 Wildcats’ victory. NS led 32-30 at halftime.

If played, the 7 p.m. District 2 contest will be two days shy of a full 365-day calendar year since last season’s encounter.

“Since they knocked us out last year, I think it’s been on all of our minds since then,” Bass said. “The kids will be plenty motivated. I’m sure they will be amped up and ready to go.”

Bass was asked if SWL is more dangerous than a year ago.

“As a team, they are definitely a lot better. They’re much deeper. They’ve got more weapons and a lot more you’ve got to try to worry about,” he said.

Bass indicated if North Shelby were to win, the Raiders would likely host the winner of District 1’s game between Drexel and Archie in the state semifinals. 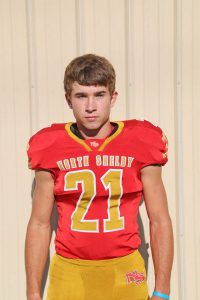 NS closed the regular season with running back Justin Lunsford rushing for 1,037 yards and 20 touchdowns. Quarterback Cale Stoneburner ran for 845 yards and 16 scores while throwing for 13 TDs with one interception.

While NS received a forfeit from Norborne-Hardin Central last week due to COVID-19, SWL creamed the Concordia Orioles 88-22. The Wildcats led 64-14 at the half. Senior quarterback Wes Hughes threw for 264 yards (six TDs) and ran for 101 (two scores).

Hughes had already established single-season school records for passing yardage and TD passes. He also set a team single-game passing mark with 394 yards in the Wildcats’ 84-66 win at King City on Oct. 23.

Hughes transferred back to SWL from Illinois earlier this year. He attended Southwest through elementary school.

“He’s something else,” Bass said of Hughes, “very accurate, very intelligent, goes through his reads and progressions better than I’ve seen any eight-man quarterback do.

“He doesn’t have the arm strength or the release that the Willhite kid did from Pattsonsburg, but I think overall is more of a developed passer than Willhite was and he’s a much better runner than him, too,” Bass added.

“Jackson Lunsford is a problem,” second-year Wildcats head coach Oren Magruder said in an email. “He gave us headaches on both sides of the ball. When we were on defense, we couldn’t get around him to get penetration to try to slow down the option. When we were on offense, we had zero interior run game because we simply could not get him moved. He is great at the point of attack and has really good feet for someone his size.

“We know he is going to be a handful and will have to game plan around him,” Magruder added.

For his part, Sears was named 275 Conference First Team at center Oct. 29. Last week against Concordia, he played wide receiver (emphasis added) with five receptions for 107 yards and three touchdowns.

“Jaeden is very unique,” Magruder said in an understatement.

“Jaeden is motivated by the team’s success. I know lots of people say that about players, but he was going to be the guy to replace Mack (at quarterback),” said Magruder.

“When Wes moved in, Jaeden accepted moving back to the line and said, ‘All I care about is the betterment of the team. I’ll play wherever you need me,’” Magruder continued.

“Nobody has really stepped up to recruit him and it has been very disappointing to me. We just have a hard time getting schools to come look at our players.”