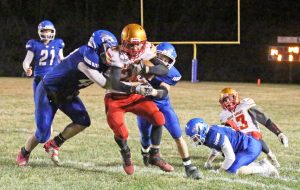 North Shelby running back Justin Lunsford is converged upon by two Southwest Livingston defenders during Friday’s District 2 championship game at Ludlow. Lunsford finished the season with more than 1,100 rushing yards and 21 touchdowns. Photograph by Marlana Smith

Running in open space, Hughes avoided his guests from northeast Missouri like one of the world’s most notorious eccentrics.

North Shelby’s first-half difficulty stopping Hughes was a big part of the Raiders’ 34-22 loss Friday in the District 2 championship game.

For the second straight season, Southwest (10-1) advanced to the state semifinals at North Shelby’s expense.

Hughes ran for 234 yards and three touchdowns while passing for 166 with two TDs and two interceptions.

“(Steven) Willhite was a great player for Pattonsburg and did so many good things in that offense, but he wasn’t the threat Hughes is as a runner,” Bass continued. “If we play Southwest with Willhite at quarterback tonight, I really think it’s a completely different ball game.”

Willhite is now on the roster of Missouri Western State University.

A key sequence in the contest occurred with two minutes to go before halftime.

Trailing 20-6 at the Southwest 10, the Raiders (8-3) needed one yard and had two shots at gaining a first-and-goal. The Wildcats stopped both.

“That was a killer swing in momentum,” Bass said.

SWL opened the second half with a three-minute drive capped by a Hughes 2-yard TD run. 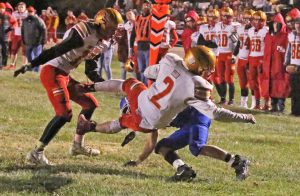 Set up by Noah Greenwell’s interception at the North Shelby 10 with 3:33 left in the third quarter, Cale Stoneburner culminated an 11-play 70-yard drive with a 5-yard TD. The two-point conversion was good.

In the fourth, the Raiders defense halted Southwest on a fourth-and-4 at the NS 26. Shortly thereafter, Stoneburner threw an 11-yard TD pass to Rob Uhlmeyer. A two-point conversion resulted in the final score.

“Tackling was an issue for us in the first half and that made a significant difference in the game,” Bass said.

“Our kids dug in. They controlled this ball game in the second half,” Bass added. “They held the highest-scoring team in the state to half their average and their lowest total, I think, in two years. To do that, on a poor tackling night, that’s pretty damn good.”

North Shelby scored on the game’s seven-play opening drive. Stoneburner threw a middle-screen pass to Justin Lunsford who dashed for a 28-yard TD. A 6-0 lead held up until Hughes scampered for a 34-yard score late in the first quarter.

SWL went up 12-6 on its first possession of the second on Hughes’ 12-yard TD throw to Keeney. The Wildcats later added another TD and two-point conversion.

Lunsford finished the night with 86 rushing yards on 25 carries. The junior running back concluded the season with 1,123 yards and 21 TDs.

Stoneburner was 14 of 16 passing for 118 yards with one touchdown and one interception. The junior QB was held to 40 yards rushing by SWL ending up with 885 and 17 TDs.

Uhlmeyer, also a junior, had seven receptions against the Wildcats for 59 yards and a touchdown.

“Three losses this year to the top three teams in the state, that’s heartbreaking but it shows how close we are,” Bass said. “We’re right on the door step and eventually, we’re going to kick the door in. We’ve got the kids to do it. They’ve done everything I’ve asked.

“This is a loss, but it will motivate us to continue to pursue a championship because it’s still there for the taking.”