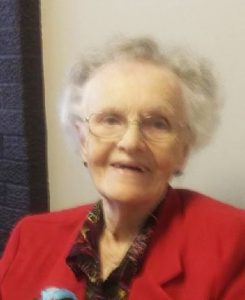 Amma Jean Ray, 87, of Edinapassed away Friday, Nov. 27in the Knox County Nursing Home in Edina.

She was born July 14, 1933 in Gifford, the daughter of Ira and Lorene Reed Elliott.  She was united in marriage to Richard Lyle Ray on Aug. 16, 1952, in Shelbina and he preceded her in death on January 6, 2003. Amma Jean was also preceded by her parents and one daughter Margaret Elaine Ray in 1981.

Surviving are one son Richard Wayne Ray of Novelty, one sister Margaret Irene (Myrlen) Trout of Rolla, one sister-in-law Connie Ray of Iowa, and several nieces and nephews.

Amma Jean graduated from Novelty High School.  She and her husband owned and operated the Novelty General Store and Novelty Café for several years.  She also worked at the Knox County Nursing Home for seventeen years. Amma Jean loved collecting dolls, was an avid Duke Basketball fan, playing canasta and going out on supper dates with her friends.  Amma Jean was a loving, caring person who was always ready to lend a helping hand and never asking of anything in return.  She was a member of the Novelty Christian Church and a past member of American Legion Auxiliary in Novelty.

Visitation was held Monday, Nov. 30, from noon till time of services at 2 p.m. in the Hudson-Rimer Funeral Home in Edina.

Burial was in the Novelty Cemetery.

Memorials are suggested to the Novelty Cemetery.  Memorials may be left at or mailed to Hudson-Rimer Funeral Home, P.O. Box 1, Edina, MO, 63537.