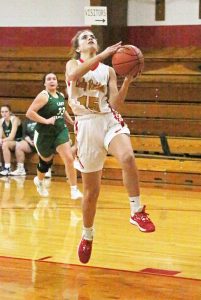 North Shelby sophomore Caroline Linberger goes in for a lay-up against the Lady Hornets on Tuesday, Dec. 15. Linberger had 18 points. Photograph by Marlana Smith

The Lady Raiders outscored Westran 20-4 in the first quarter.

“I thought the girls executed well and we got to work on some things that we don’t normally get to work on so that was good,” said North Shelby coach Landon Daniel.

The second quarter wasn’t any different as NS added 28 points to its lead. North Shelby sophomore Natalie Thrasher scored 15 of her 19 points in the quarter. Twelve points were 3 pointers.

“Natalie had a huge second quarter for us and has played well. I thought that Lilly (Cook) and Ceairra (Kirby) did a lot of the little things right to get everyone involved, including the younger girls which was really good to see,” Daniel added.

Cook had seven assists and Kirby had six.

The Lady Raiders had 12 steals. Cook, Kirby and sophomore Caroline Linberger had three. Thrasher had two and junior Jaylea Barrick had one.

Linberger scored all nine of the Lady Raiders points in the third quarter. She finished with 18.

“Overall, just a nice win for us and something we can build on,” Daniel continued.