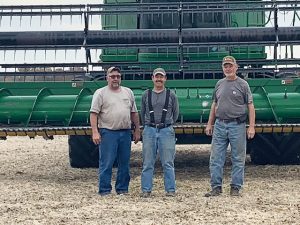 Pictured above are three of the individuals who helped with the harvest. From the left: Harold Beach, Billy Wilkerson and Willard Otto. Photograph courtesy of Harold Beach.

In November, the Leonard-Area Growing Project harvested 60 acres of soybeans on the Jeff and Leah Otto farm just north of Cherry Box in southern Knox County.

Culmination of the planting-to-combine endeavor produced $32,346, of which $29,111 has been designated to help alleviate hunger in the strife-torn Palestine-Gaza region of the Middle East.

The geographically small Gaza Strip territory is located on the eastern coast of the Mediterranean Sea. It shares short inland borders with Egypt (seven miles) and Israel (32).

The Leonard-Area Growing Project started in 2004. Revenue generated from previous Project harvests has paid for items ranging from heifer cows in Africa to small family-friendly grain containers in Bolivia.

Several neighbors worked throughout the growing season assisting with the end result.

Harold Beach said it was his year to oversee the general groundwork.

“I think it was Willard Otto that planted it. Merlin Yoder and his family sprayed it,” Beach said. “Bichsel Spreading Service took care of the fertilizer and Vortex Seed furnished the seed for it. Different farmers furnished the chemical.”

According to the Growing Hope Globally website, 58 percent of Palestine-Gaza inhabitants are food-aid dependent. Twelve percent of children exhibit moderate to severe malnutrition.

COVID-19 has caused problems with sale and distribution of rabbits thus limiting incomes.

“The good news is that rabbit-raising families have a steady source of protein and are generally able to eat meat at least twice a week,” a statement on the website indicates.