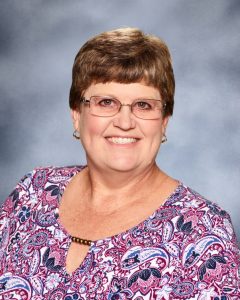 Kathy Jackson began teaching at North Shelby in 1993 and language arts in 1996.

It is overstating the obvious Jackson has seen technological advancements affect reading and writing.

Jackson strives to teach good sentences, paragraphs and essays but one aspect has almost become obsolete.

“Hand writing is something that has definitely changed. We don’t do much hand writing of anything anymore,” Jackson said.

She indicated much of the coursework is done in Google Classroom.

“We have vocab worksheets, the kids don’t have to write a single word, necessarily. They’re typing everything,” Jackson said.

When it comes to grammatical mistakes, technology is good – but comes with a catch.

“We have an extension on our Chrome called Grammarly. It helps them find errors that they have,” Jackson said. “Now, my thing is I’m not sure they always understand why it’s an error and that, to me, can be an issue because they are just making the same mistakes over and over.”

Jackson and colleague Heather Christine implemented a program last year they hope will help remedy such an issue.

“They have to understand why that’s a problem and fix it, especially commas. Commas are worst,” Jackson said with a laugh.

For those dinosaurs who learned to type on manual or electric typewriters, it will probably come as no surprise there’s a whole new world out there. Jackson explained.

“Kids are using computers earlier and they don’t have dexterity to type the way we learned how to type,” Jackson said. “Jennifer Chandler does our Business (classes) and she does keyboarding with them. By the time she does an actual class of keyboarding with them, their bad habits are so engrained that, honestly, they type faster however they type.

“Now, the problem we have is lower case i’s, the letter u for the word you, we have r for the word are,” Jackson added.

Jackson, however, does not believe the issue of abbreviations is as prevalent as in the recent past.

“Quite frankly, there is an age of people probably 25 to 35ish when cell phones really came out with texting that are much worse at it than our kids are,” Jackson added.

“They are just used to autocorrect getting them capitalized when they need it and autocorrect changing u’s to the word you.”

It is believed by many in the literary community that in order to write, one must also be a reader.

The 33rd president of the United States took that philosophy further.

“Not all readers are leaders, but all leaders are readers,” Harry S. Truman was quoted to have asserted.

Bespectacled from childhood until his death in 1972, Truman was a voracious reader.

“In reading the lives of great men, I found that the first victory they won was over themselves. Self-discipline with all of them came first,” Truman said.

Such a quote, with its exclusion of great women (emphasis added), would likely cause Truman some pushback today. However, the president was a product of his time.

“We’re reading an O. Henry story in eighth grade. He wrote in the 1800s,” Jackson said. “The kids are really struggling with it. They say, ‘Have we gotten stupider because we don’t know these words, anymore?’

“I’m like, ‘Well, not really.’ But it is an older brand of English. Language is always going to morph,” Jackson added.

Jackson is pleased she currently has a group of students who became intrigued by the writing process.

“I have some sophomore young ladies that are exceptional writers. I hope they will take a vein that way,” Jackson said. “We just did a descriptive essay which is basically taking a moment in time and putting (in) the sense and imagery; just fantastic work from them.”

“They had really concise arguments. They did research and put quotes in, backed their arguments and did a great job,” Jackson said. “I really hope some of them will take a trip to journalism school.”