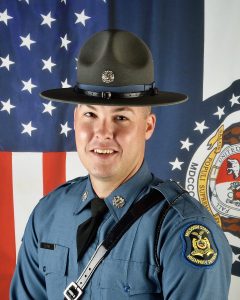 “My grandfather on my father’s side was a chief of police in Pennsylvania for a smaller municipality. I would say I looked up to him with his desire to give back to his community,” Dunn said last week.

“My grandfather did not, however, influence me in wanting to become a police officer,” Dunn continued. “Being in law enforcement is a calling. God chose me for this profession and guided me toward it.”

Dunn attended Moberly Area Community College. Prior to his appointment to the Patrol in 2008, Dunn was a Moberly police officer and deputy sheriff in Audrain and Linn counties.

As a state trooper, Dunn has served in Putnam and Sullivan counties twice wrapped around a stint in Chariton and Linn. He was promoted to corporal in 2017 and appointed assistant zone commander for Adair and Schuyler.

“I have been the back-up public information officer for Troop B for approximately four years and assisted Lt. Brown when needed,” Dunn said. “This assignment appealed to me because I am a people person. I like the idea of being able to talk to kids and people in my community in an educational atmosphere instead of an enforcement capacity.”

Dunn indicated he has been to several schools in the Troop B area emphasizing driving safety, seat-belt safety, bullying and several other topics.

“These are definitely highlights to my day as talking to younger people and helping them make the right decisions now can have an overwhelming effect on their futures and the rest of their lives,” Dunn said.

Dunn, who is the father of one son, was a four-sport athlete at Marceline. He wasn’t the type of kid who stayed inside.

“In school, I loved to hunt and fish and still do to this day,” he said. “I played baseball, basketball, football and golf. I am still an avid golfer to this day and try to play as much as my schedule will allow during the nicer weather months of the year.”

Dunn said he and his predecessor have been very good friends for several years.

“Our relationship goes back before both of us were even Patrol employees,” Dunn said. “Brown and I met when I was a Moberly police officer and he was a Randolph County deputy sheriff, so our law enforcement career together dates back a ways.

“I know in replacing Lt. Brown I have some very big shoes to fill,” Dunn added. “However, I’m confident I can meet the challenge. I just hope I can make Lt. Brown and the Troop B family proud.”