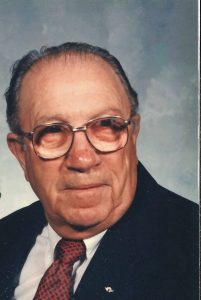 He was born Feb. 1, 1924 in Shelbyville to Lee V. and Violet Frances Inman Staggs. He graduated from Leonard High School in Leonard in 1941 and attended Culver Stockton College in Canton. Bill married Hettie Nadine Johnson on April 5, 1963.

Bill entered the United States Army on Feb. 1, 1943 and trained as a medical NCO for the 86th Infantry Black Hawk Division Medical Battalion. In March of 1945, the 86th Infantry began a campaign to take the Ruhr pocket located north of Cologne, Germany. During this operation, Bill was assigned as a driver for the company commander and came in contact with both Generals Eisenhower and Patton. Bill was north of Salzburg, Austria when the war in Europe ended. His division was redeployed to the United States, was retrained, and left in Aug. of 1943 for the Asiatic Pacific Theatre of Operation. They were sent to Luzon in the Philippines where the allies were preparing for the invasion of Japan. Bill told his family that if the atomic bombs had not been dropped on Japan, thus ending the war, he and thousands of servicemen would not have returned home. Bill was recalled into the service in 1950 during the Korean War.

In 2009, Bill attended the Mid-Missouri Honor Flight to Washington, D.C. The members of the Armstrong, Armstrong Chapter of the Daughters of the American Revolution honored Bill as their patriot of the month in September of 2012. For many years, Bill and Nadine attended reunions of the 86th Infantry Black Hawk Division.

Bill farmed, enjoyed raising cattle, and in 1971 was employed by the Soil Conservation Service in Shelby County. He was transferred to Moberly in Randolph County in 1973. Bill was a Mason, a Shriner, a member of the Eastern Star, and a life member of the VFW. He attended Trinity United Methodist Church in Moberly. Bill was a pilot and a member of the Shelby County Flying Club. He and Nadine were avid ballroom dancers and attended many dances throughout the Midwest. They also enjoyed traveling. They thought Austria was a beautiful country, and while there, Bill had the opportunity to show Nadine countryside through which he had traveled during the war. And the most fun trips were those with Jerri, Rogers, and Pete.

Bill enjoyed golfing, hunting, and spending time with his family and friends.

He was preceded in death by his parents, his sister-in-law, Sandra Staggs, his wife, Nadine, his step great-grandson Nathan Ronimous and his stepson Mac Johnson.

Bill was a good man who loved God, his family, and his country and served them well all of his life.