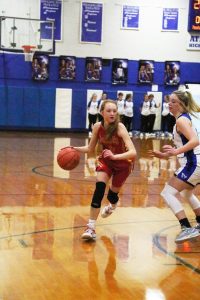 Senior Lily Cook fights her way around an Atlanta defender. Cook scored 16 points in the game. Photograph by Marlana Smith

“Just a complete game by our girls from the top to the bottom and from the start to the finish,” said North Shelby coach Landon Daniel.

North Shelby’s Natalie Thrasher got things off to a great start with a 3-pointer just seconds into the game. Thrasher had 13 points. Nine of those were 3-pointers.

Lilly Cook led the Lady Raiders with 16 points. Seven of those were scored in the first quarter.

“I could talk about the positives from every girl but I thought Lilly Cook played a great game on both sides of the ball.

“She made some really good decisions and not only looked for her shot when she needed to but set up other girls to succeed as well,” said Daniel.

The Lady Raiders scored 17 points in the second quarter. Nine of those were 3-pointers.

Thrasher put in two and senior Lalaine Treasure had one. NS maintained its lead, 30-22.

The Lady Raiders added 17 points to their lead. Ava Williams accounted for six of those. Williams scored 11 points against the Lady Hornets.

NS had great momentum in the fourth quarter, outscoring Atlanta 18-9.

Daniel said rankings doesn’t mean anything to him as a coach or to the girls.

“We wanted to prove a point that while Atlanta has some talent and a good record, we are a pretty good team too and I think we did a pretty good job at that,’ Daniel added.

The Lady Raiders (7-2) are scheduled to travel to Schuyler County on Tuesday. NS is scheduled to host Canton on Friday at 6 p.m. 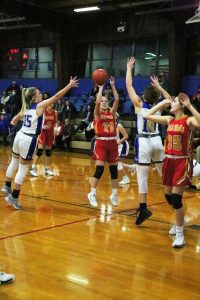 Ceairra Kirby puts up a shot in the Lady Raiders victory against Atlanta on Thursday, Jan. 7. Photograph by Marlana Smith