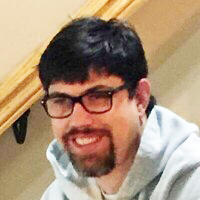 Jason was born to Phil and Lisa (Hammond) Conrad on April 7, 1980 in Macon. He graduated from South Shelby High School in 1999 and loved to talk about his classmates and his times at school.

Anyone that knew Jason knew he always had a heart and passion for country music. He loved to make tapes and later CDs of his favorite artists and albums to give to others.

You could find Jason watching his favorite shows (Everybody Loves Raymond and Dr. Phil) or listening to his country music on any given day while eating his favorite meal of cheeseburgers and french fries.

Jason also had a loving passion for holidays and calling family and friends on their birthdays. His favorite holidays were Christmas and April Fool’s Day. Jason believed that Christmas trees should be displayed year round because they were just too beautiful to put away. He also loved to call family members on April Fool’s Day to start their days off with some humor. Jason, although quiet at times, was known by those close to him for his quick wit. At one of his last doctor’s appointments, when asked if he had any allergies, Jason responded (pointing to his mom,) “Yeah, just to her” without missing a beat.

Jason held a special place in many hearts and will be missed dearly. We rejoice in knowing that he is no longer held back by the constraints of his earthly body. The celebration that happened when he crossed into Heaven was a great one we know; filled with love from those who’d passed before him, a car for him to drive and a tool belt to start on his first construction project.

Jason’s funeral will be held at Shelbina Christian Church on Wednesday, Feb. 3 at 11 a.m. Visitation will precede the service starting at 10 a.m. at the church. Burial will be held in the Shelbina Cemetery. Due to the Coronavirus pandemic, the family requests that you wear a mask during the visitation and service.

In lieu of flowers, donations can be made in Jason’s name to Neighbors Helping Neighbors or Ronald McDonald House.