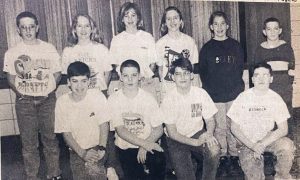 A splendid supply of garden seed has been received at the Herald office this week from Congressman M.A. Romjue for free distribution among the people of the community. Seeds include varieties of corn, beets, radishes, lettuce, turnips, carrots and tomatoes.

Ameen and Company of Hunnewell have rented the John Bauer building recently occupied by the Carty Motor Company and will open a general merchandise, dry goods, clothing and general store. The company has stores in Hunnewell, Monroe City, Bell Town and other points.

J.M. Wood, superintendent of the County Infirmary, drove one of the big army trucks owned by the county, to which a heavy drag was attached over the streets of Shelbyville Saturday morning. This made the streets smoother.

The following are members of the cast of the play “Her Honor, the Mayor” to be given by the Junior and Sophomore classes of the Bethel High School at the opera house in Leonard on March 4: Burdelle Burckhardt, Ralsmon Pilcher, Waldon Lair, Pearl Kilb, Irene Steinback, Mildred Pickett, Mildred Buckingham, Mildred Bethards.

United States President Harry S. Truman and former British Prime Minister Winston Churchill are scheduled to arrive in Fulton on Tuesday, March 5 where the latter is to make an address before Westminster College at 3 o’clock that afternoon on the invitation of the school’s president, Dr. F.L. McCluer.

Ellis Lee Peters, son of Mr. and Mrs. Fred Peters of west of here, was discharged from the army Feb. 16 at Jefferson Barracks. He was inducted in November, 1942 and left the States in August, 1944 serving in the European theatre.

Vernon C. Claus, son of Mr. and Mrs. Fred Claus of this city, was discharged from the army Feb. 4 at Ft. MacArthur, Calif. He entered the service in December, 1942 and served in the European theatre from February until July 1945.

James Reed Bower of Shelbina, son of the late Anna Bower, was discharged from the army Feb. 10 at Jefferson Barracks. He entered the service in November, 1942 and served 15 months in the Asiatic-Pacific theatre.

Cpl. Elvon Harris of Hunnewell received his discharge from the army at Jefferson Barracks on Feb. 13. He had served overseas with a hospital unit for 14 months.

Clarence Renner, northeast of Clarence, received a $10 bounty on a wolf he killed Sunday which was issued from the County Clerk’s office here Monday. Approximately thirty men were in the hunt and five wolves were seen by the group.

On March 6-7, the Shelby Theatre will present “Abroad with Two Yanks” starring William Bendix, Helen Walker and Dennis O’Keefe. Tickets are 26 and 13 cents.

Miss Dora Lee Ratliff and her mother, Mrs. T.L. Ratliff, were guests of the Business and Professional Women’s Club at the Sky-Way Café for dinner Thursday evening. After dinner, Miss Ratliff showed slides and told about her trip to Europe and the Holy Land.

Clark Theatre in Shelbina will present “The Wild Bunch” starring William Holden, Ernest Borgnine and Robert Ryan on March 7 and 8.

In Shelby County, the primary focus for candidates thus far is for the office of Sheriff. Sheriff Gerald Gander has indicated he will not seek reelection. Also an enticement to candidates was approval by the county salary commission in September, 1995 to raise the Sheriff’s salary from $27,450 to $34,000 effective after this next election. Those filing for Sheriff thus far are: Art Cullifer, Emden; Allen Barton, Clarence and Sam Buckman, Shelbina.

During executive session, the North Shelby School Board renewed the contracts of Principals Sandra Kiehne and Terry Morrow. Kerri Jackson was hired to replace Mrs. Carol Farmer who resigned. Miss Jackson will be teaching English and will be an assistant basketball coach. She is also certified in French. 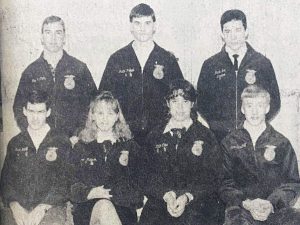 25 YEARS AGO – FFA members in the South Shelby chapter that had met requirements for the highest degree in the chapter were honored during a ceremony held in conjunction with the annual FFA breakfast, Thursday, Feb. 22. Degree candidates pictured above are front row, from the left: Scott Ratliff, Jenna Rubison, Nikki Chinn and Jamie Westhoff. Back row: Jon McCarty, Justin Pollard and Jacob Lee Kendrick. Also eligible for the degree but not present were Robbie Dewitt, Holly Little, Jeremy Westhoff and Aaron Magruder.