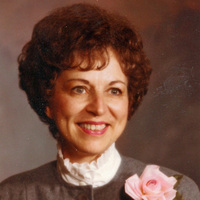 Betty Lou LeGrand Crist, 92, of Shelbina went to be with her lord and savior on April 23.

Betty Lou was born on Oct. 24, 1928 in Cherry Box to Roy and Maurice English LeGrand.  Betty graduated from Shelbina High School in 1946. She attended William Woods University, University of Missouri-Columbia and Truman State University. She taught one year at Red Star School, east of Epworth and three years at Lakenan.

She married Robert Eugene Crist on April 29, 1951. In addition to her full-time job of raising five children, Betty Lou worked tirelessly for 35 years restoring the historic Benjamin House to its original beauty. She plastered, painted, made draperies, refinished furniture and found time to attend auctions to find antiques that were true to the era of the historic Benjamin home. She spent countless hours adding hundreds of flowers, herbs and trees to the Benjamin House yard.  She directed hundreds of tours through the home to educate the community about the history of the home, and to help pay for the ongoing restoration of the Benjamin House.

Betty Lou was known for her cooking, especially her famous holiday cinnamon bread that she handed out joyfully at Christmas time.

Betty Lou was an active member of the Shelbina Christian Church including, in earlier years, acting as the church pianist. She was also involved in Eastern Star, PEO Chapter U, the Garden Club, the Shelby County Historical Society and the 49ers Home Economics Club.

Betty Lou will be remembered for her smile, her kindness, thoughtfulness and love shown toward others and, most importantly, for her love for the Lord Jesus Christ.

Donations are suggested to the Shelbina Christian Church, the Michael J. Fox Foundation for Parkinson Research or to the donor’s choice.

A private service will be held at the Missouri Veteran’s Cemetery in Jacksonville.

As there will not be a visitation, friends are encouraged to share their favorite Betty Lou story with the family either through the funeral home web site or by sending a note to the family.