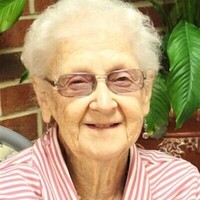 Minnie Kate Hawkins, 96, of Shelbina, passed away on May 22, 2021 at Salt River Community Care in Shelbina.

Minnie Kate was a member of St. Mary’s Catholic Church in Shelbina and St. Mary’s Altar Society.  She graduated from Shelbina High School in 1941. In earlier years, she enjoyed cooking delicious meals for family gatherings, especially Thanksgiving and Christmas. She always enjoyed playing cards and games and spending time with her grandchildren.

Minnie Kate was a traditional homemaker and “mom” during her child-raising years.  She was one of many “neighborhood moms” on S. Shelby Street who all looked out for the neighborhood kids, which were many.  She supported her husband in the home and raised her kids to her best Christian ability teaching them what was most important – God and family. She loved reading her Bible and gathering together with fellow believers to learn about Jesus, but her greatest desire was that all people would come to the saving knowledge of the Lord Jesus Christ.

She was preceded in death by her parents; husband; one son, Patrick Hawkins; one grandson, Daniel; eight brothers; one sister; and a daughter-in-law, Brenda Poe Hawkins.

Visitation will be held Friday, May 28 at 10 a.m. followed by a Catholic funeral service at 11 a.m., both at Greening-Eagan-Hayes Funeral Home in Shelbina. Deacon Larry Mitchell will be the celebrant.

Burial will follow the service in St. Mary’s Catholic Cemetery of Shelbina.