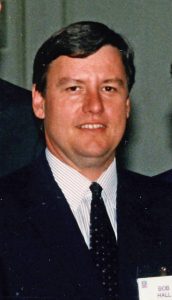 Bob graduated from Shelbina High School in 1961 before attending Quincy College and Northeast Missouri State University. He retired from Shelter Insurance as a district sales manager in 1990 after many years with the company. Bob has also served as a member of the Kirksville Rotary Club, the Kirksville Country Club and the Jaycees. He is remembered as a wonderful storyteller and jokester. He liked fishing, hunting, reading, and playing cards, and he loved going to auctions, estate sales, and collecting old antiques. He also enjoyed spending time with his friends at the Senior Centers in Shelbina and Monroe City.

He was preceded in death by his parents; brother, Tom Hall; son, Shane Hall and daughter-in-law, Vicki Hall.

At Bob’s request, there will be no services.

Memorials may be made to the Senior Centers in Shelbina and Monroe City or the Rotary Shane Hall Memorial Scholarship Fund.