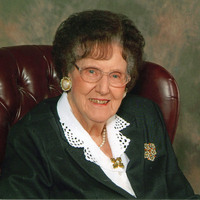 Erma Freeda (Thomas) Ruth, age 101, of Macon, MO went home to be with her Lord and Savior Jesus Christ on Saturday morning, August 8, 2020.

Erma was born in Shelbyville, Missouri, the daughter of Clifford Earl and Ruby Maggie Jane Thomas. She graduated from Shelbyville High School where she played basketball and was in the high school plays. She worked for Hardy Construction Company which was in the court house in Shelbyville, where she met Robert H. Ruth who worked for Hardy Construction. He would come to get his pay check each week from her. They were married on January 14, 1940 in Shelbyville, Missouri. They traveled with Bob’s job for a few years, living in a small trailer, until their second child was born. They moved to Macon in 1947 where Erma has made her home ever since. Erma was mostly a homemaker raising her three daughters, but earned money to help with family expenses by taking in ironings, cleaning houses, working at restaurants making pies, working at the Macon Laundry, selling Avon, growing sweet corn and working at Nod’s Market and Burnam’s Grocery stores.

She was a member of First Baptist Church, Macon and her favorite work was church work – helping with WMU, teaching Sunday School, VBS and organizing and sponsoring the Youth Choir of which her three daughters were members. In fact, she had so many jobs at the church one time her husband Bob asked if she was going to move in.

Erma also loved to attend Southern Gospel Music concerts with Karen, Janie and Hugh and never missed a Booth Brothers Concert if they were close. She also liked to attend old-fashioned revivals and was a good friend to many Evangelists that preached in Macon and the surrounding communities. She went on vacations with family and friends to Colorado, Yellowstone, Kentucky and Southern Missouri. She loved to go to Branson to see the music shows. We sometimes thought her middle name was “Go.”

She was preceded in death by her husband Robert H. Ruth, her parents and one brother.

Funeral service will be 11:00 am on Wednesday, August 12, 2020 at the First Baptist Church in Macon, MO with Pastor Phil Bray and Bro. Jim Bolin officiating. Burial will be in Hillcrest Memorial Gardens north of Macon. Visitation will be 10:00 until the time of service, at the church. In lieu of flowers, the family suggests memorials to the Mission Dignity – a program of Southern Baptist for elderly pastors and wives who have no retirement.