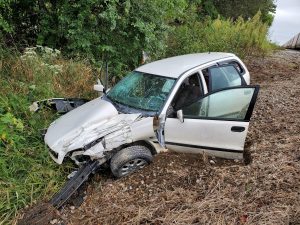 The 2020 Volvo driven by Donald Leftwich of Shelbina was totaled after being struck by a train. Photo Courtesy of Shelbina Fire Protection District.

A Shelbina man was seriously injured after being hit by a train at 12:05 p.m. on Tuesday, September 8 in a private driveway one mile west of Shelbina.

The Missouri State Highway Patrol said, Donald G. Leftwich, 46 was northbound driving a 2000 Volvo when he failed to yield to an oncoming eastbound Burlington Northern Train driven by Mike N. Lane, 52, Brookfield. Leftwich was struck on the driver’s side. The car then traveled off the east side of the roadway.

The MSHP said there was a stop sign at the crossing.

Leftwich was taken by Salt River Ambulance to Blessing Hospital.

It is unknown if Leftwich was wearing his seatbelt.

The Volvo was totaled, and the train had minor damage.

The MSHP was assisted by the Shelby County Sheriff’s Department and Shelbina Fire Protection District.