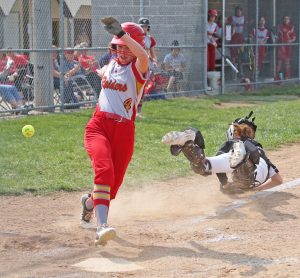 North Shelby’s Ceairra Kirby scores a run as a Clopton throw to home plate flies to the back screen in the Lady Raiders 8-3 victory Saturday at the North Shelby Tournament. (Click photo to enlarge) Photograph by Marlana Smith

When 2020 concludes, the Herald’s Sports Story of the Year quite possibly will be the North Shelby softball team winning three games to capture its own single-day tournament championship on Saturday, Sept. 19.

Consider: since an opening day 2-0 victory against Brashear Sept. 3, the Lady Raiders had not played another contest. The majority of the squad endured a 14-day quarantine.

Consider: Due to the quarantine, NS had one full-squad practice less than 24 hours prior to tournament day.

Consider: regardless of the pandemic, immediately following the game no one a reporter asked could recall the last time NS won its own tournament.

North Shelby (4-0) scored 29 runs. It opened the morning session with a 16-2 rout of Linn County. In the semi-final round, NS defeated Clopton 8-3.

The Lady Raiders dispatched Scotland County 5-2 for the championship.

“I’m not going to lie, whenever they said everyone could come back Friday, I was like, ‘Alright, we’re going to have a tournament? Possibly playing three games?’” Lady Raiders head coach Haley Hardy said.

“I was so proud of our girls. I told them they played such a great day of team softball,” Hardy continued. “We pitched, we caught the ball, we hit the ball, we ran the bases.”

Cook was asked if, in her wildest imagination, she thought the Lady Raiders would have such a performance on Saturday.

“Honestly, no, I did not. I was not expecting the worst but expecting a lot more errors and things not clicking well,” Cook said.

North Shelby manufactured its win versus Scotland County (4-4) by scoring single runs in the first, second and third innings, then two in the fourth.

However, as the championship game progressed, Thrasher found her groove. From the third inning on, the sophomore hurler held SCHS to two singles with six strikeouts. Her only walk was in the seventh inning.

“In the huddle, I just told the girls, ‘You know what? Their (North Shelby) balls found the gaps, ours didn’t tonight,’” SCHS head coach Riley Lucas said. “We probably hit the ball harder than they did; ours were hit to them. That was the game.”

Key hits for NS were Chesnie Robbins’ lead-off triple in the first. She scored on a Cook fielder’s choice. Ava Williams blasted an RBI double in the second. Robbins plated again in the third on Caroline Linberger’s sacrifice fly.

North Shelby did its fourth-inning damage with two out.

Marissa McEwen ripped a double to the left-center field fence. Courtesy runner Jaylea Barrick scored when Scotland County’s defense experienced chaos in which it committed two, if not three, errors on the same play. Robbins had an RBI single. She finished 3 of 4 at the plate.