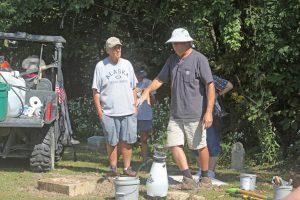 Cliff Mullins of Steffenville was one of approximately 50 people who attended the workshop.

Mullins became interested in the subject by accident when he observed recent activity at Mount Pleasant Cemetery.

“I looked out my window and these ladies were pulling these 400-pound stones,” the 42-year-old Mullins said with a laugh, “so I just went out to help them out and they told me about this.”

The ladies were Kathleen Wilham of Shelbina and Lea Ann Robertson of Jackson, Miss.

Mullins also had been intrigued by a Civil War story told by Junior Lund, a Steffenville-area cemetery caretaker.

According to Mullins’ recall of what Lund said, Union soldiers were set to execute a married Confederate sergeant with two children. A young officer volunteered to take the sergeant’s place and was killed by firing squad.

“I just thought that history was kind of neat,” Mullins said. “Just walking through the graveyards seeing these stones from the 1800s, they had lives.

“We look at their numbers on there and it’s just that, numbers, but I just started thinking about all these people’s lives that they lived,” Mullins added.

In addition to Mullins, attendees included individuals from Emden, La Belle, Macon, Philadelphia, Shelbina and Shelbyville. Others traveled from Iowa and St. Louis. 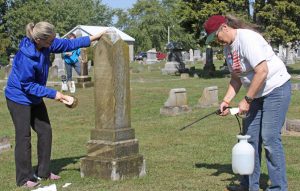 Appell started cemetery work in the mid-1980s. He began specializing in the historical aspect of cemeteries approximately 20 years ago.

Due to the pandemic, Appell’s work at previously-scheduled exhibitions was often cancelled. He brainstormed a bit.

“I thought people would have more time and less money and there was always a great interest in this subject,” Appell said. “I decided to try something ambitious and go to every state in the continental U.S.”

Appell’s original plan was to visit 48 states in 48 days and provide one-day seminars at a single location.

“I was snowed out in Colorado and smoked out on the west coast,” Appell, who spent the previous day in Miami, Okla., said.

“I was just looking at some of Jonathan’s YouTube videos,” Hudson said. “The cemetery where my mom is buried, I was walking around and said, ‘Oh, there’s a Civil War guy.’

“Well, there was another one and another one,” Hudson continued. “They all needed cleaning because they’ve been there for over 100 years.”

Hudson’s first project was a success. He cleans a monument a week, if the weather is nice.

Saturday, Appell was scheduled to be in Frankfort, Ky. Sunday, it was on to the Andrew Johnson National Park site in Greenville, Tenn.

By the time this story is read, Appell, barring unforeseen circumstances, will have been in Tuscaloosa, Ala., and Macon, Ga.

Appell’s primary website is atlaspreservation.com. Another site is gravestone preservation.info.