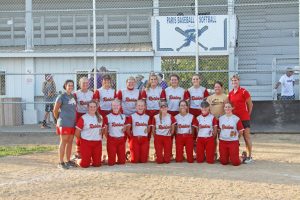 The loss was the first of the season for the 9-1 Lady Raiders.

Tournament Director Gary Crusha told the Herald top-seed Canton informed him Thursday evening it would withdraw from competition due to a positive COVID-19 test on the team.

The Lady Raiders added two runs in the fifth. Robbins reached on an error and stole second base. Cook and Natalie Thrasher followed with an infield single and walk. Linberger and Williams each came through with sacrifice RBI.

In the sixth, Whitney Snow led off with a double. Ceairra Kirby blooped an RBI single to left field. Robbins ripped an RBI double to left-center field. Cook added another RBI on a ground out.

If one likes good pitching and defense, North Shelby’s match-up in the semifinals against Clark County was tailor-made for your taste.

NS rallied from behind in the seventh and eighth innings to win.

Clark County claimed a 1-0 lead in the top of the sixth inning. Olivia Miller led off with a single to left field. With two down, Kiara Brunk hit an RBI single to right-center field.

NS tied the game in the bottom of the seventh.

Ellison struck out Cook on a 3-2 pitch. Thrasher beat out an infield single; then Ellison hit clean-up batter Linberger with a delivery. After a passed ball advanced the runners, courtesy runner Zoe Barrick scored on Whitney Snow’s infield single.

The Lady Raiders stranded the potential game-winning run at third base. Ellison bore down to strike out Meg Shively and Williams grounded out.

North Shelby was down to its final strike in the bottom of the eighth.

With Williams at third base, Robbins ripped a 1-2 pitch down the third-base line. An overthrow to first base tied the score 2-2.

The Lady Raiders got the walk-off victory when Robbins scored on Cook’s line-shot to left.

Thrasher had seven strikeouts and no walks. Ellison finished with eight Ks and one walk. Both pitchers went the full eight innings. 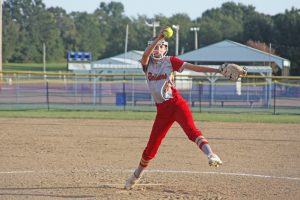 North Shelby sophomore Natalie Thrasher delivers a pitch against Salisbury during the championship game of the Paris Tournament on Saturday, Sept. 26. Thrasher pitched the Lady Raiders to a 5-1 record last week. Photograph by Troy Treasure

Snow started in the circle. Thrasher relieved her starting the fourth inning.

Snow worked out of a one-out, first-inning jam. After issuing back-to-back walks, Snow induced a ground out from Kaisen Carter; then put away Rachel Fessler with a strikeout.

Thrasher evaded trouble in the fourth.

With one out, the sophomore gave up consecutive singles to Kate Kottman and Brooke Bartholomew. Thrasher struck out Addi Wales and Anna White popped out. The baserunners were stranded at second and third base.

Fessler led off with an infield single. Kottman’s single to center was mishandled allowing Fessler to score. With one out, White laid down an RBI bunt single while Breanne Haines stroked an RBI single to center.

That set the stage for Khloe Wyatt’s blast over the center-field fence.

Thursday, North Shelby traveled to Harrisburg and emerged with a 5-1 victory. Thrasher had eight Ks. She helped her own cause going 3 of 4 with three RBI including a two-run double.