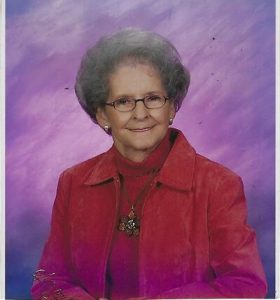 Rami was the third child of Leon Lester Rogers and Grace (Campbell) Rogers. Her beloved siblings were Ruby Perry (Howard), and Arlene Larson (Guy) who are deceased along with one great grandchild, Alanna Eve Raymond.

Rami grew up as a farm girl in Shelby County and was always an eager and hard worker. She graduated from Novelty High School May 1950 and shortly married Carl Eugene Douglas on November 21st 1950. They lived many years in Novelty. where they ran a farming operation.

Carl and Rami enjoyed traveling, golfing and visiting with family and friends and in retirement, they decided to build a home in Kirksville, to be close to all their children. Shortly after moving, Carl passed away on Oct. 7, 1997. Rami remained in their home and continued to live in Kirksville.

She loved her family, grandkids/great grandkids, attending theatrical performances and traveling. She was a member of the First Christian Church, Kirksville and the Shrine Jewels.

Visitation was with the family will be from 5 to 7 p.m. Friday, Oct. 9  at Davis-Playle-Hudson-Rimer Funeral Home.

Funeral service was be held at 11 a.m. Saturday, Oct. 10 at Davis-Playle-Hudson-Rimer Funeral Home. Burial will be in Park View memorial Gardens.

Memorials in memory of Rami are suggested to the Adair County Ambulance District.

Arrangements in the care of Davis-Playle-Hudson-Rimer Funeral Home.