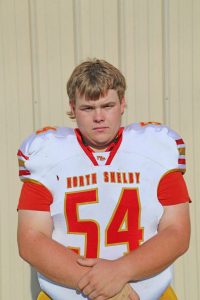 When Jackson Lunsford arrived on the scene in 2002, he checked in at seven pounds, 10 ounces.

“But, as soon as he was sprung, he took off,” Jackson’s mother said with a laugh.

“I remember when he was one year old, I took him in for his 12-month check-up and he was 34 inches and 34 pounds,” Jill recalled. “The doctor said, ‘He’s perfectly square!’”

According to his parents, Lunsford, a North Shelby center and defensive lineman, was fascinated as a very young boy by objects of size and power.

Jackson himself was asked if strength was a factor in those early curiosities.

“I think that does have something to with it, plus what all is behind it. With dinosaurs, what ended it, what they’re all about,” Jackson, an admitted history buff, said. “With trains, just how they could move so much weight. I think that’s just neat how they can do that.”

Along the way, Lunsford developed a work ethic, much of it attributable to his father. Scott works construction, specifically laying asphalt. On a recent Friday after working on Interstate 55, Scott drove from Cape Girardeau to Orrick to watch his sons Jackson and Justin play.

“When Jackson was probably three, me and the two boys were driving through some road construction,” Jill said. “We had the windows down and, of course it’s asphalt.

“It’s not like he works in an office typing on a computer,” Jackson said later.

Lunsford first started playing flag-football at the YMCA in Macon at age five.

Fast-forward. Lunsford was named an All-State lineman last season and a shoo-in for repeat status at the conclusion of his current senior season.

“I could talk days about him,” North Shelby head coach Seth Bass said. “He’s friendly, but not overbearingly friendly. You can tell he genuinely cares about everybody he interacts with. He’s not an in-your-face kid. He’s got a quiet streak, an empathetic streak.

“He’s got a competitive streak but he wants to, especially his teammates, he wants to make them better, as well,” Bass continued. “He tries to bring a lot of people with him for success.”

Lunsford admitted he suffered from lack of self-esteem as a small child because of his weight. He was sometimes bullied.

“But after football, it kind of stopped because I knew what I was doing,” Lunsford said with a smile.

“I realized I’m not just the fat kid. I’m actually someone that can be useful for something,” he added.

At the 2012 NFL Combine, University of Memphis defensive lineman Dontari Poe’s performance opened a lot of eyes, including the big kid from Shelbyville who looked up Poe on YouTube.

“He was 350 pounds, but he moved like he was 300. He was running like a 4.86 and he could bench press,” Lunsford recalled. “It was just weird to see someone that big move that quick.

“Then when he came to the Chiefs, I mean, they couldn’t run on him. He just couldn’t be moved. It was nuts,” Lunsford said.

Jackson has a favorite Poe play and keen memory of it. Oddly, Kansas City had the ball.

“They were playing the (Denver) Broncos and he threw a touchdown pass to Demetrius Harris, their tight end, while jumping in the air. That was nuts. It was Christmas Day,” Lunsford said.

Jackson was asked what he thought if Bass were to line No. 54 in the offensive backfield during a goal-line situation.

“I’d probably say, ‘hell right!’ That’s the best way I can put it,” Lunsford said. “That would be pretty neat.”

Jackson readily admitted his chances of ever throwing a Poe-like pass are slim. However, the scenario of carrying the ball was intriguing.

“Yeah, we do some crazy stuff in the backfield, I will say that,” he said with a chuckle.

Lunsford said his favorite memory playing football, to date, was the camaraderie he enjoyed with senior members of the 2019 team.

“If I’m being honest, those were the people I hung out with, I didn’t really hang out with my classmates. After school, I was with them,” he said. “Beating North Andrew with them, that was a highlight, or maybe Pattonsburg, that was a good one, too. Those were very happy times.

“We’d mess around and stuff like that, don’t get me wrong, but when it came to game time, it was time to go. Just being able to flip the switch like that,” Lunsford added, with the snap of an index finger and thumb.

During last off-season, the 5-11 Lunsford dropped 50 pounds down to 300. He admits feeling better, being quicker and possessing more endurance.

“We met Bryce Johnston in Clarence and he specializes in that kind of stuff. He’s a chiropractor. He went through the same issues, too,” Lunsford said. “He has all these meal plans where he doesn’t eat sugar. You do that and take some supplements. He’s really helped me with that.

“If you got him up to even 6-2, he’d have his choice of where to go,” Bass said. “He’s still going to be able to at small schools. I think some smaller Division I’s are missing out.”