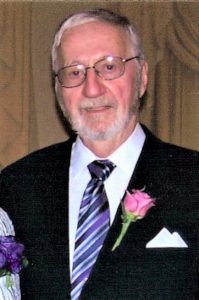 C.W. was born May 6, 1933, in Bethel to James Waldon and Mildred Buckingham Lair.

C.W. was preceded in death by his parents and several cousins.

After graduating from Bethel High School, C.W. proudly served his country in the United States Army for two years during the Korean War.

Professionally, C.W. was an electrician by trade and a union member of IBEW. He retired from Supreme Electric in Quincy, Ill. At one time, he also owned a car dealership and hardware store in Shelbyville.

C.W. loved sprint car racing as both an owner and spectator. He was a mechanical craftsman and had his own workshop where he spent a lot of time doing small engine repairs and working on model cars and tractors. He also restored antiques in his spare time.

C.W. was a member of Madison Park Christian Church where he served as an elder and president of his Sunday School class. He also volunteered many hours doing electrical work at the church.

Memorial contributions may be made to Madison Park Christian Church or Mount Pleasant Cemetery Association.

Online condolences may be shared and a video tribute may be viewed at www.ODonnellCookson.com.