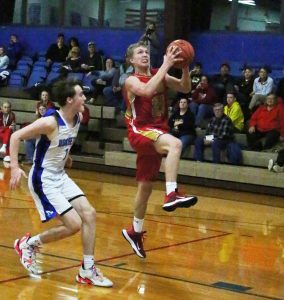 Carson Orr puts in a bucket during a fast break against the Hornets on Thursday, Jan. 7. Photograph by Marlana Smith

“Frustrating game and hopefully this frustrating week teaches us what we need to do to avoid games like this,” said North Shelby coach Landon Daniel.

Kyle Smith got the Raiders on the board scoring the first four points. Smith tallied 16 points in the game.

The game was tied twice in the first quarter, but the Raiders took a 13-11 lead after McDaniel put in a 3-pointer.

Seven more points were added to the Raiders lead ending the first quarter.

Within three minutes of the second quarter, Atlanta took the lead and would maintain it the rest of the game.

The Raiders were outscored 33-25 in the second half.

NS (4-5) is scheduled to take on Schuyler County on Tuesday. The Raiders are scheduled to host the Canton Tigers on Friday.