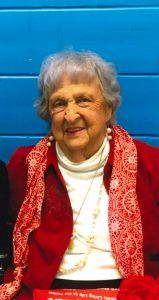 She was preceded in death by her parents and her husband, Bud.

Jeana was a member of Shelbina United Methodist Church, PEO, 49ers, and the Red Hats Society. She enjoyed playing bridge and pitch with her friends, shopping, golfing, picnics and going for Sunday dries.

Visitation was held Saturday, February 5, from 11 a.m. to 1 p.m. at Greening-Eagan-Hayes Funeral Home in Shelbina. Funeral services followed the visitation at 1 p.m. at the funeral home. Burial will be held at the Shelbina Cemetery.

Memorials may be made to Neighbors Helping Neighbors and the Shelbina Golf Course.